Going into the EHF FINAL4 Györi Audi ETO KC were the favourites, boasting the best attack and defence of the competition. But as is so often the case, especially in knock-out games, the favourite does not always win and Vipers Kristiansand beat them in the final.

The most important position

In the final, however, some things still went as expected. The game was faster than many finals, but Györ had 57 possessions, Kristiansand 56, both practically exactly their average for the season.

One of the reasons for the many possessions was Györ’s attempts at scoring into the empty goal while Vipers played with an additional player instead of the goalkeeper. But each time it failed because the Norwegian side’s substitutions worked perfectly, and Katrine Lunde was able to stop the goal every time. Lunde played a big part in Györ’s frustration growing and growing in the second half.

Overall, the 42-year-old did not have nearly her best game of the season. She saved 28.6 per cent of the shots on goal, or 30.8 per cent if you exclude seven-metre penalties. This season she had lower numbers only in five and six matches respectively.

However, in the semi-final against Metz Handball she was the game-winner, saving 38.1 per cent of shots.

Nevertheless, she (and her backup Andrea Pedersen, who was only on the field for one seven-metre penalty) won the goalkeeper battle against Györ’s all-star trio.

In the final, Amandine Leynaud, Silje Solberg and Laura Glauser were together only able to save 23.3 per cent of shots, their worst performance of the season and 11.4 percentage points below their average – the best in the competition.

In contrast, Lunde and Pedersen saved 27.9 per cent. That allowed a shooting percentage of 63.3 per cent for Györ, while Vipers were at 64.7 per cent. 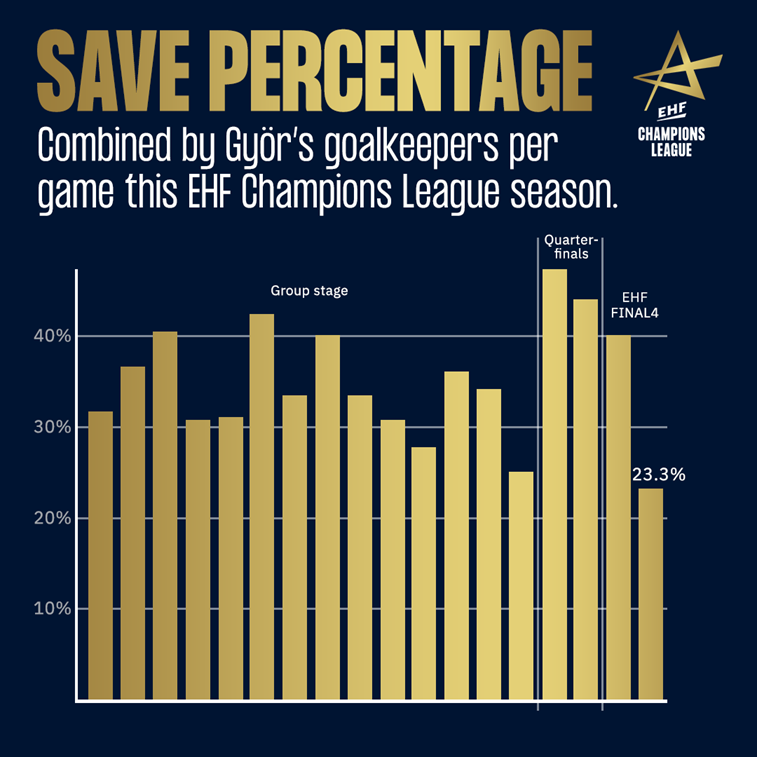 It is no secret that the goalkeeper is the most important position in handball. No other single position can influence the game as they can. The team that won the goalkeeper duel also won 79.7 per cent of the games this EHF Champions League season.

If you only consider games in which the goalkeeper duel was won with a difference of more than 15 percentage points, this rate rises to 92.9 per cent.

But it was not only the goalkeepers who decided the EHF Champions League final. Another big point is turnovers.

Going into the game Györ and Vipers were the two teams that forced the most turnovers. In the final, only Vipers managed to get close to their normal numbers. Overall, they forced 9.6 turnovers per 50 possessions (11 in total), which is still less than their average of 12.2.

Györ, however, were only able to force their opponents to lose the ball 6.3 times per 50 possessions (seven in total). That is the second-lowest number of their season, after the semi-final against Team Esbjerg (5.8). Vipers simply did not take big risks.

However, the five-time champions clearly missed Kari Brattset Dale, newly crowned All-star Team best defender of the EHF Champions League this season, who missed the tournament as she is pregnant.

The best comes at the end

But some individual offensive performances were key for the Norwegian side as well. Nora Mørk, who went into the weekend as the best scorer of all players still in the tournament with six goals per game, had some problems in the beginning but still scored four goals (44.4 per cent efficiency) and took responsibility in crunch time.

🚨 Nora Mørk gets the ball in just in time and @VipersKrSand have the lead at the break ...#ehfcl #ehffinal4 pic.twitter.com/cGPNUko0re

The most noticeable, however, was EHF FINAL4 MVP Marketa Jerabkova. The Czech left back scored seven goals while shooting 63.6 per cent, a very good percentage for a back court shooter. She has repeatedly stood out in the past because she manages to score much better than expected on difficult distance throws.

Jerabkova is also a perfect example of the development in Kristiansand during the season. She did not play that much at the start of the season but got more and more comfortable with her role in Ole Gustav Gjekstad's system, culminating in her outstanding 12-goal performance in the semi-final.

The average of four games is always taken to prevent individual outliers against extremely good or weak teams from having a too great influence. Thus, the actual performance is more obvious than just looking at wins and losses. 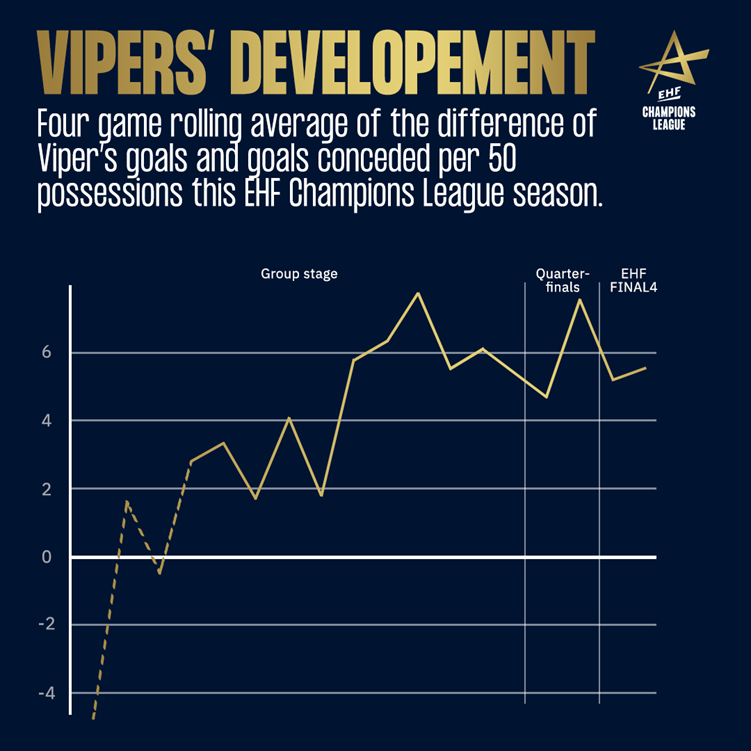 Looking at the graph, the upward trend as the season progresses is immediately recognisable. The fact that the curve did not go even higher at the end is of course also due to the fact that there were no weaker opponents in the knockout phase at the end of the season.

It is therefore obvious, that to win the EHF Champions League you can find your way as a team across the whole season, as Vipers Kristiansand have impressively done.

Next Article Trophies for Barça, Veszprém and Kielce; Kiel hit by injuries