THW Kiel raised their level in the second half to beat MOL-Pick Szeged 29:22 on Wednesday night in the first leg of the VELUX EHF Champions League Last 16.

Kiel have never been sent out of the Champions League in the Last 16, and the German side have every chance to maintain their perfect record this season after carving out a seven-goal win in the last 30 minutes against Szeged.

The first half was completely equal with changing leads. Only once a team led by more than one goal as Kiel went 10:8 up.

Szeged playmaker Stas Skube was a particular problem to the Kiel defence, and changing into a 3-2-1 formation with Domagoj Duvnjak on top did not help the home team in keeping the short Slovenian under control.

Skube was just as good at making himself dangerous as at assisting his teammates - and line player Bence Banhidi in particular.

Kiel also had their trouble with Szeged's flexible and aggressive defence, and Marko Vujin was actually the only Kiel player who found the key to open the visitors' defence.

The Serbian right back scored the first three Kiel goals in the match, six goals on seven attempts in the first half, and eight in total during the match.

After the break, Kiel´s 3-2-1 defence started to function much better and this also enabled Niklas Landin to improve in goal. In the attack, Kiel became better at finding Patrick Wiencek on the line, while Miha Zarabec stepped up as playmaker.

Less than six minutes into the second half, Wiencek gave Kiel their first three-goal lead (19:16). And though Szeged soon levelled again at 19:19, the home team had a 6:0 series for a 25:19 lead and later went 29:21 up before the visitors scored the last goal of the match.

The seven-goal lead seems to put Kiel in a favourable position for the return match in the Varosi Sportcsarnok in Szeged on Sunday, 1 April. The winner of this tie will play defending champions Vardar in the quarter-finals. 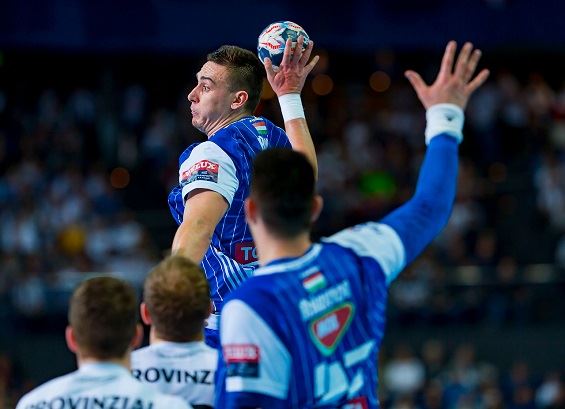 Juan Carlos Pastor, Szeged coach: "It is tough but we will try everything to change the match in the second leg. Today we had the match under control for 40 minutes, then Landin saved a lot and we made too many mistakes."

Stefan Sigurmansson, Szeged left wing: "We played very well for 30 minutes. Then we lost too many balls versus Landin and got the 'easy goals' from Kiel. But we have a few days to prepare for the second leg and we still have our chance to reach the quarter-final."

Alfred Gislason, Kiel coach: "Niklas Landin saved six or seven throws. He changed the match. It’s a good result but I know Szeged, I know the arena and I know this experienced team. Seven goals are nothing in modern handball."

Niklas Landin, Kiel goalkeeper: "Especially the second half was very good for us. We attacked very well in defence and got some easy goals – this was the key for this game."

LIVE BLOG: Running coverage of round 6 in the DELO EHF Champions League with four matches set for this weekend