After a summer in which Hungary sweeped the Women’s 17 and 19 EHF EURO championships, it comes as no surprise to see one of their stars chosen as the EHF Player of July/August.

Under 17 star Blanka Kajdon collects the award at this time of year for the second consecutive year, thanks to he MVP performance at the Women’s 17 EHF EURO in Slovenia.

Meanwhile, history has been made by Kristoffer Henriksen as he is the first beach handball player to be chosen as EHF Player of the Month after leading Norway to the EHF Beach Handball EURO in Poland.

“Not my personal success”

Hungary’s Women’s 17 EHF EURO success in Slovenia was a true display of their bright future, winning every match en route to the title.

Blanka Kajdon led the team brilliantly in the playmaker position, but refuses to take all the plaudits for herself.

“It is unbelievable for me to have won this title for the second time. However, I do not consider it my personal success, because without the collaboration of my team, it would not have been achieved.

“Last season I faced quite a few difficulties, but they taught me to be conscious of what I do.”

Having never previously won a Younger Age Category championship, Hungary’s women did the double this summer and the success signals very bright things in the future.

“These victories are well-deserved with a lot of work and effort in the background, so we must be proud of both ages,” adds the 17-year-old, who remains focused on developing as a player and holding on to her place for club NEKA and country. 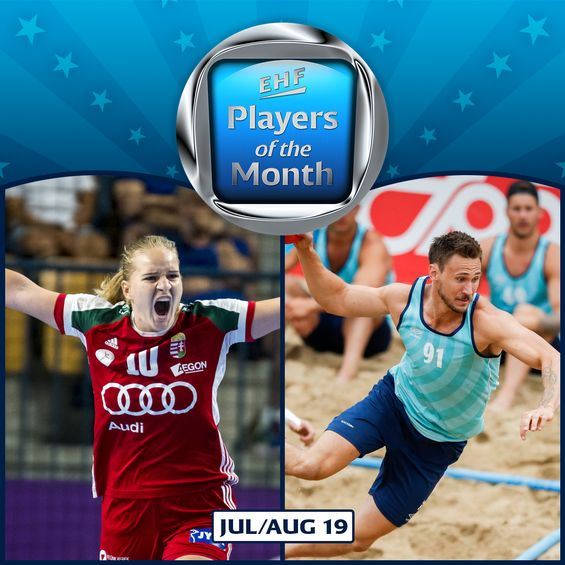 Having suffered defeat at the quarter-final stage of the past five EHF Beach Handball EUROs, Norway’s men’s beach handball team finally made the breakthrough this summer in Poland, beating Croatia 2:0 to reach their semi-finals, where they overcame Russia in a thrilling clash. Central to all of this was Kristoffer Henriksen, who played a key role in defence and on the line in attack.

“I have been playing for Norway since 2014, but we never had any good results to show for our work, before this summer.

“I am extremely proud to have contributed and showed that Norwegians are seriously signing up to play among the best in beach handball.

“When I look back at Poland, I think of the guys on the team, and the ‘beach bubble’ we lived in. We were extremely focused on the task that we had in front of us. We believed in ourselves and made it happen.”

The most remarkable thing about Henriksen’s MVP award in Poland was that he earned it without playing the final. A direct red card in the final second of the semi-final against Russia meant he was suspended from the gold medal match, which Norway lost 2:0 to Denmark.

“I am so humbled to be announced as the tournament’s MVP. The prize shows the dedication the whole team has put down.

“Although, if I could choose between the MVP prize or playing the final, I would choose the final every time.”

Now that he has tasted the business end of the championship, the 28-year-old, who also plays indoor in Norway’s top flight with Challenge Cup participants Halden, wants more.

“At the end of the day, the silver medal has left a great hunger for more medals, for me and the team. The Norwegian team is very excited to start a new season and prepare for the World Championship.

“My personal goal for next year is to play a lot of European Beach Handball Tour events with the new club we are creating, then the national team will be in focus when the World Championship is on the horizon.

Previous Article Superb Most clinch qualification for the first time

NEWS: On the fringes of the 12th Secretaries General Conference and the European Handball Convention, the members of the EHF Executive Commi…

Back in the Game: Secretaries General Conference 2020

NEWS: Secretaries general from handball federations across Europe are updated on a variety of topics by the EHF ahead of a busy 2020/21 seas…