After four days of action on the sand at the European Beach Tour finals in Sicily, the medals were decided in the men's and women's competitions on Sunday afternoon.

On the final day of the ebt Finals 2022 in Sicily, Team Blue Bee - The Danish Beachhandball Dream clinched the title in the women's competition and LX50 Handball triumphed in the men's competition. 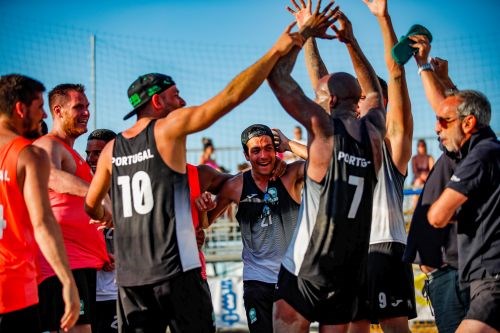 Ahead of the two finals in Sicily, at least one ebt Finals title was heading back to Portugal. But hopes of a Portuguese double on the beach on Sunday were dashed when Team Blue Bee denied GRD Leça - Love Tiles in the women's final.

While Rita Alves finished as the top scorer in the women's event, Team Blue Bee's Cecilie Lindgaard crucially matched her total of 20 points in the final.

Although Thomas Robben earned top scorer honours in the men's event, Camelot Handball Tilburg could only finish in fourth place as CBMP Ciudad de Malaga completed the podium behind the two Portuguese sides.

Copyright belongs to Kolektiff Images for all photos used in this article.

Stage set for semi-finals in Sicily

DAY REVIEW: Team Almeria continue to impress in the women's competition, but reigning men's champions HEI are out ahead of the semi-finals

16 teams get first taste of main round

DAY REVIEW: The preliminary round of the ebt Finals 2022 ended Friday before the opening matches of the main round closed the day's action

NEWS: Beach handball experts Chris O’Reilly and Lamprini Tsàkalou are behind the microphone for Sunday’s medal matches in Sicily

Favourites dominant on day one at ebt Finals 2022

DAY REVIEW: The top medallists from last season’s ebt circuit started the ebt Finals 2022 strong with commanding wins on day one in Italy

NEWS: The beach handball season highlight in Sicily this week gets extensive coverage on EHFTV and Twitch

Teams at the starting blocks for ebt Finals in Sicily

PREVIEW: 29 teams make their way to Italy in an attempt to lift the new but ever so coveted ebt Finals trophies

NEWS: EHF Beach Handball Education Courses have taken place on the fringes of the ebt tournament at Camelot