Things we know after the group matches

Things we know after the group matches

With six rounds played, the Women’s EHF Champions League reaches its first moment of reckoning. We bid farewell to the group matches, and welcome the main round.

But firstly, let us make a honourable mention to those who will end their Women’s EHF Champions League journey here. The tournament will miss the feisty Scandinavians Larvik and Vipers, who fought tooth and nail for their place among the 12 best teams. Meanwhile, Brest Bretagne and Vistal Gdynia failed to win a single point from the six matches played, but will, at least, learn a lot from this invaluable experience.

With the Women’s EHF Champions League taking a break until 26 January, we have gathered some talking points for you to think about, while following your favourite players at the World Championship over the winter break.

Vardar’s form, generated through cohesiveness and team effort, has been praised – but let’s have a look at the numbers behind the team’s performance.

With 182 goals scored so far, the unblemished Macedonian side boast the second best attack in the Champions League, but have no scorers among the top five.

Andrea Penezic (37 goals) is their best shooter, but four other players in the team have scored 19 or more goals and an additional three players have contributed to their team’s perfect record with 10 or more goals.

Judging by the playing styles, it is clear that the rampant CSM are in for the kill. The numbers back this up: with 192 goals in the net, the Romanian powerhouses just can’t stop scoring, averaging a staggering 32 goals per match.

Their effort is less spread out than Vardar’s, with only four players responsible for more than half of the team’s goals.

Speaking of contributions, two standout scorers have each contributed to more than one third of their teams’ total goals.

The out-of-form Thüringer have the 50-goal hero Iveta Luzumova to thank for their main round berth; while Veronica Kristiansen’s 47 goals helped FC Midtjylland progress beyond the group matches for the ninth time. 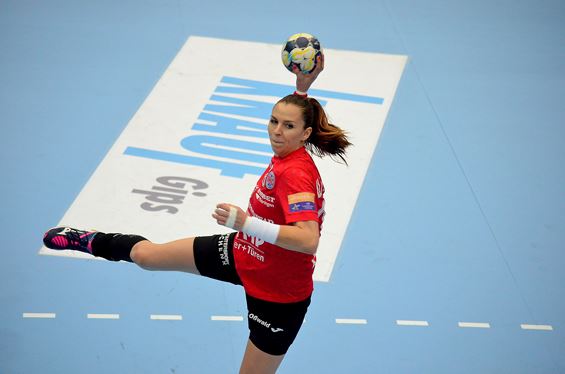 Surprisingly, Nykøbing (with 168 goals) boast the fourth best attack in the competition. However, their leaky defence often clouds the accomplishment, also ranking the second worst in conceded-goals (163), right behind FTC and Thüringer, square on 167.

Meanwhile, favouring the frugal approach is Györ, followed by Rostov-Don. Having conceded only 126 goals, the Hungarian team’s concrete defence was often to the expense of their attack, ranking nowhere near their biggest rivals CSM and Vardar. However, there is plenty of time for that to change.

Good or bad, winning or losing, a team’s long-term chances can often be scaled, and sometimes even predicted by analysing the streaks.

Vardar are on a six-match winning streak, and of course have the bragging rights of an unblemished season so far. The main round draw is kind to the 2017 finalists, having them lined up against two known rivals – Metz and Buducnost. Bietigheim will pose the only uncertainty for Vardar, with odds-on to extend their streak.

Following their revenge against Rostov-Don, Györ have been on a three-match winning streak, determined to catch the wave of good form and ride it all the way to the main round.

A post shared by Győri Audi ETO KC (@gyoriaudietokc_official) on

The same can be said for CSM, after the vengeful, record-breaking rout of Nykøbing, which gave an extra incentive for Neagu and her teammates to complete the group matches with a three-win series.

Thüringer are on a five-match losing streak, despite securing the main round berth. As evident on their most recent outing, against Vardar, when the nine-player German runners-up lost their fifth consecutive match in the Champions League, winning is the furthest thing from a habit for them. It will take something special to turn their fortunes around.

Meanwhile, Midtjylland and Krim have lost both of their latest matches, and while, at two defeats, it may still be early to talk about a losing streak, both clubs know only one victory could be the difference between success and failure at this point.

While it is still hard to see beyond the big three – Vardar, CSM and Györ - it is also getting increasingly difficult to tell who the fourth favourite will be.

The main round gives chances to the less fortunate, but it is also when the consistency and quality of rotation and depth come into play. The hard-working manner of Vardar’s early form may be impressive, but even more of a daunting task will be to maintain it for the remainder of the season.

The World Championship 2017, just around the corner, could be the turning point, and a factor that could also decide the rest of the Champions League season.

Injuries, confidence and spirit are all at stake here. There will be negative, as well as positive effects.

For players from Germany, Hungary and Denmark, countries represented with two teams in the main round, the World Championship will have a defining influence; especially with Györ and FTC having the highest ambitions in the Women’s EHF Champions League.

Meanwhile, it is a dilemma for Larvik and Vipers fans, whether their players, many of which make the national team setups of Denmark and Norway, can overcome the disappointment and find the motivation to perform for their countries.

So, follow closely. We will be back with more Women’s EHF Champions League action, with the main round starting on 26 January.

Previous Article Six teams that impressed the most

Next Article Dmitry Zhitnikov: "I am always eager to learn something new"