Urban back for another challenge

Hosting EHF EURO 2022 meant that Slovakia qualified for a major tournament for the first time in ten years. Moreover, Peter Kukucka’s team sealed their first win at the EHF EURO, which was a success in itself, despite failing to progress to the main round of the competition.

Therefore, Slovakia’s performance begs some questions. Was it a one-off or will they become regulars in the most important competitions? Are their fans in for a treat in the coming years?

“Teams like the Netherlands or Portugal have improved tremendously in the past years and are winning games against the European powerhouses on a regular basis. We have stagnated a bit, but we are ambitious and I think something good is brewing in Slovakia,” says right wing Tomas Urban, the team’s top scorer at the EHF EURO 2022 with 20 goals in three games.

At the age of 32, Urban has been a part of Slovakia’s men’s senior team at the only two IHF Men’s World Championship editions they qualified for and at two of their four EHF EURO participations.

At Croatia 2009, Urban was only 19 years old. He also took the court at Sweden 2011, helping Slovakia win six of the 16 games they played in those two events.

The right wing is now the third top scorer of all time for Slovakia with 330 goals scored, six more than current coach Peter Kukucka, and is definitely the most experienced player in the squad.

“I thought that my international career will be over after the EHF EURO 2022. You like to say experienced, but the truth is that I am quite old and I did not see myself playing at the highest level,” adds Urban.

"I could not say no"

But then, something changed.

After goalkeeper Teodor Paul and defensive specialist Oliver Rabek announced their international retirements, Urban would have been a devastating loss for Slovakia.

However, the stance was definitely changed after Russia was eliminated from the Qualification Phase for the IHF Men’s World Championship 2023, due to the current political circumstances.

Therefore, it meant that the winner of the double-header between Slovakia and Belgium would qualify for the tournament due to be hosted in Poland and Sweden in January 2023.

“I always loved to play for the national team and try to qualify for major tournaments. This is a huge opportunity for us to be back at the highest level and take part once again with the best of the best, after featuring at EHF EURO 2022.”

“Therefore, I could not say no and I am back, ready to play and help my team, Slovakia, to earn our third berth for this competition on the court,” adds Urban.

With an average age of 27.9 years old at the EHF EURO 2022, Slovakia were in the middle of the pack as the experience goes, yet coach Peter Kukucka had to make do with an interesting mix of veterans like Urban, Paul, Rabek and captain Lubomir Duris as well as young players like Jakub Prokop, Tomas Smetanka and Marek Hnidak. 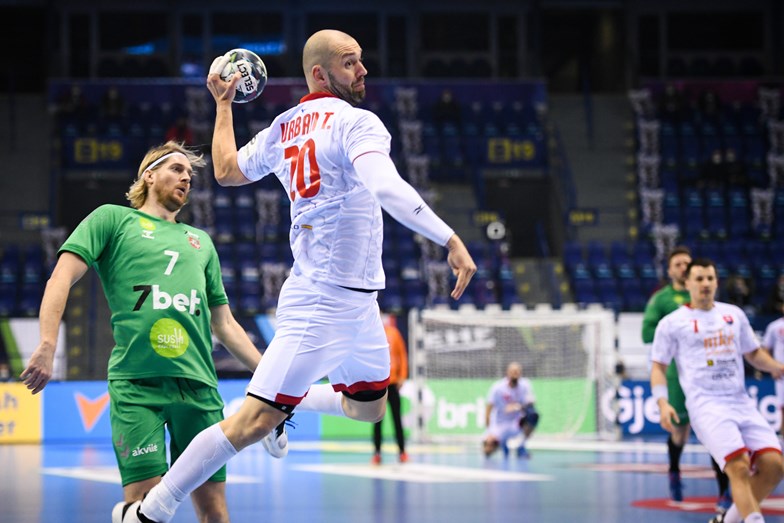 The success against Lithuania was crucial, ending one of the longest streaks without a win in history in the competition – ten games. Yet Slovakia want more.

“I think hosting the EHF EURO really helped the popularity of handball in Slovakia grow. But to help even more fans get acquainted with the sport, the results need to be better. Therefore, progressing to the World Championship next January is crucial for us,” says the right wing.

“It is interesting for us because we have some players who are well over 30 years old and others who have just turned 20 or are 22, 23 years old. It is a gap between us, so the chemistry needs to be sorted out, but with the staff, everything is easier,” adds Urban.

Locking horns with tougher opponents means that Slovakia will be favoured before the first match of the doubleheader, scheduled for Wednesday in Topoľčany. The second leg is due to be played in Hasselt three days later. But Urban hopes that the World Championship berth will have been already decided by then.

Belgium progressed to phase 2 part 1 after tough clashes with Turkey and Kosovo, while Greece won their group without dropping a point.

Belgium lost three games but sealed the tickets to the next phase with a 33:29 home win against Kosovo.

“We will be favourites, but these types of games need certain attention. If we win a leg by two goals and lose the other by ten, what’s the point in it? I have never played against Belgium, but I do hope we will win the games and qualify for the World Championship,” concludes Urban.

DRAW REVIEW: The winners of the 10 two-leg duels will qualify for the final tournament in Denmark, Norway and Sweden

PREVIEW: The 10 European play-offs for the 2023 IHF World Championship in Denmark, Norway and Sweden will be drawn in Ljubljana

SUMMARY: Coverage of the last four matches in the preliminary round of the Women's EHF EURO 2022 on Wednesday

ROUND REVIEW: Austria, Italy and Iceland also book their tickets for next qualification stage for the 2023 IHF Women’s World Championship

Portugal, Kosovo and Greece secure passage to the next phase

REVIEW: Türkiye and Iceland won their first encounters and are a step closer to Qualification Phase 2

Eight spots still open for the Qualification Phase 2 of the…

QUALIFICATION PHASE 1 PREVIEW: Ukraine are already through to the next phase, with Austria and Slovakia also virtually qualified, but other…

REVIEW: Kosovo, Austria and Portugal all secured crucial wins in their quest to progress to the next phase of European qualification for the…

PREVIEW: Qualification phase 1 of next year’s Women’s World Championship throws off this week