FTC-Rail Cargo Hungaria are also in the main round, but the Hungarian team had to work hard for their berth at home against Thüringer HC. The German side were leading until 13 minutes into the second half, and the match was not decided until the last minutes.

Only two weeks after Vardar won 31:19 away against Larvik, they had huge problems with the very same opponent at home.

Without playmaker Andrea Lekic, the Vardar attack had big trouble with an effectively tackling Larvik defence who found the right height against the home team's attacking players from the start.

After Larvik changed an 8:6 deficit into a 10:8 lead, the visitors were in charge until well into the second half. They held their one-goal half-time lead for the first few minutes after the break.

Vardar finally found solutions against the movable Larvik defence, but they were still not able to shake their opponents off completely. The home team could not feel entirely safe until Alexandra Lacrabere made it 29:26 with a minute and 17 seconds left.

With eight points after four matches, Vardar have reached the main round with two matches left. Larvik still have a chance to join them despite being on zero points.

Vardar coach Irina Dibirova said her team were perhaps too relaxed after their away win against Larvik. She said Vardar would work harder ahead of their next match against FTC-Rail Cargo Hungaria.

“We lost, but I think we played a great match," said Larvik coach Tor Odvar Moen. "I think that we spent most of our energy in the first half in which we could be more efficient, but we missed some open shots. It’s clear that we faced one of the strongest teams in the EHF Champions League and it is hard to win here. That is why I'm proud of my girls, they fought like lionesses all the time."

FTC-Rail Cargo Hungaria had to work hard for their main round berth at the Dabas OBO Arena Saturday afternoon.

Due to injury, Thüringer HC only had 10 players on their roster, but the visitors succeeded in keeping the game close all the way and to even be in the lead for substantial sections of the 60 minutes.

Although FTC were up 8:6 early in the match, Thüringer dominated the rest of the first half and were leading 13:10 at one point before being one goal up at half time. 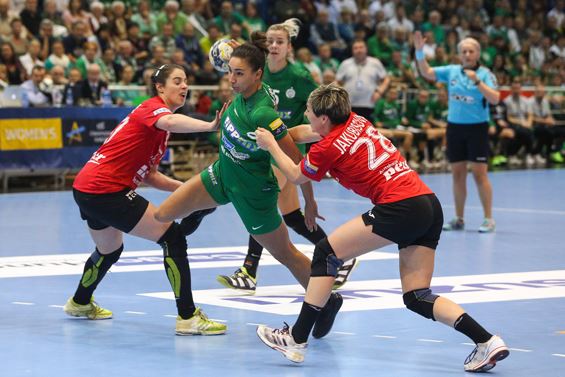 In the second half, the visitors were still leading by a goal or two, until Danick Snelder gave the home team the lead again, making it 20:19 13 and a half minutes into the half.

During the last quarter FTC took a more decisive lead of 27:23, but Thüringer came back once again. The match was not decided until Dorottya Faluvegi made it 28:25 with less than a minute left.

While FTC are ready for the main round, Thüringer can look ahead to a battle with Norwegian champions Larvik for the last main round ticket in the group.

FTC centre back Aniko Kovacsics said: "We did not play well today, but I trusted our team during the whole game and I felt we could win. It was the third hard game in one week, but it shows our strength that we could win all three."

Next Article CSM and Krim power through to main round

INTERVIEW OF THE WEEK: One of FTC-Rail Cargo Hungaria’s most prominent rising stars speaks about this year so far and what is coming up next…

MOTW REVIEW: A brilliant performance from the Catalan side and their goalkeeper Kevin Möller, while the ‘Zebras’ lose their second home matc…