Vipers and Rostov want back to Budapest via MOTW

Vipers Kristiansand and Rostov-Don both competed at the EHF FINAL4 in 2019. Only one of those teams will return to the marquee event of the DELO EHF Champions League this season.

Vipers and Rostov will play their quarter-final tie as a double-header in Russia this weekend.

The Norwegian side’s ‘home’ game has been named Match of the Week. The game in the Palace of Sports in Rostov-on-Don is scheduled for throw-off on Saturday 10 April at 14:00 CEST and will be streamed live on EHFTV. The return leg takes place 24 hours later. 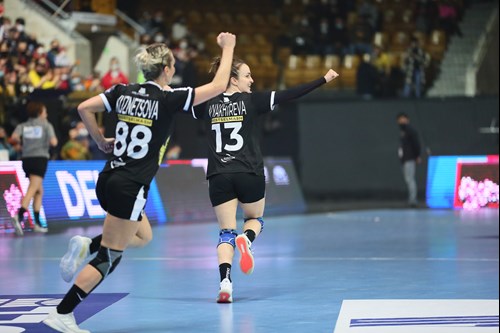 Vipers are eager to get back to the EHF FINAL4, two years after their debut appearance – and third-place finish – at the season-ending event in Budapest.

In March they overcame a tough challenge from Odense Håndbold in the play-offs, winning the all-Scandinavian tie 65:62 after losing the first leg at home.

Rostov had an easier path to the quarter-final, recording two easy wins over HC Podravka Vegeta for an aggregate 71:44 victory.

The Russian side also had a smoother campaign in the group phase, winning the same group A in which Vipers finished fifth.

Rostov clearly lead the head-to-head comparison. The 2019 runners-up have won all previous encounters, including the most recent one in February, when Vipers also had to play their home game elsewhere – in Erd, Hungary.

That result shows that the double-header in Russia this weekend could easily become a close affair, with two teams that would each make for a strong contender at the EHF FINAL4 on 29/30 May.

Previous Article Gomes: “We have the best team in the world when we give everything”

MOTW FEATURE: Vipers right wing Jana Knedlikova is relishing the underdog role and ready for a fight in Russia

FACTS & FIGURES: Just before the start of the quarter-final, here are the numbers and stats that matter in the DELO EHF Champions League

OFFICIAL STATEMENT: What happens if matches are not played due to the pandemic in the quarter-finals of the DELO EHF Champions League

MOTW REVIEW: A seven-goal victory in the first-leg quarter-final gives Vipers the upper hand against Rostov

Summary: Vipers and CSKA join the party in Budapest

QUARTER-FINAL PREVIEW: Two Russian teams hope for results on the home court, while Györ and Brest aim to build on their first-leg success

QUARTER-FINAL REVIEW: A draw against Rostov was enough for Vipers to go into four top teams in Europe

QUARTER-FINALS REVIEW: Györ secured a second win against Buducnost to proceed to the DELO EHF FINAL4 for the fifth time in a row