There are only five games left at the Women’s EHF EURO 2022, with four sides ready to tough it out in Ljubljana in the final weekend. The final phase of the tournament is the moment where fans can have their say by picking their favourite players in the vote for the All-star Team on the Home of Handball app.

Aside from having their voices heard, fans will also be rewarded for their participation in the vote with exciting prizes. Up for grabs are a €1,000 travel voucher provided by Coolbet, Official Partner of the Women’s EHF EURO 2022, as well as five official match balls and Women's EHF EURO 2022 goodie bags.

A total of 48 players — six in each position plus the best defender — have been selected by a panel of EHF experts. The next step is for fans to vote using the official Home of Handball app, available for iOS and Android.

The MVP of the Women’s EHF EURO will be chosen by the EHF panel of experts.

Voting is open now and will close on Saturday at 23:59 CET. The All-star Team will be announced prior to the medal matches on Sunday 20 November. 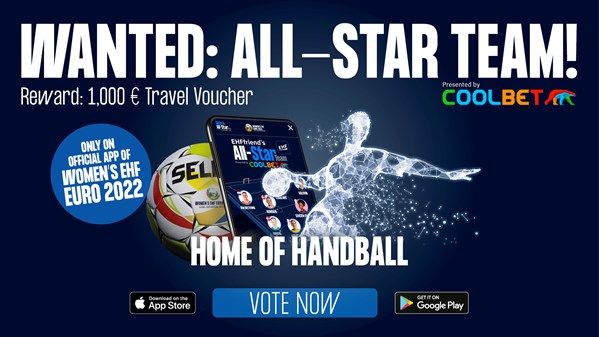 The nominated players have been selected based on their overall performance, both in attack and in defence. Underlying statistics and key contributions in crunch moments of the games have also been taken into consideration to create the best picture of their contribution to the team’s performance.

The MVP of the Women’s EHF EURO 2020, France back Estelle Nze Minko, is nominated for left back position.

Next Article EHF, Infront, DAZN and Supponor team up for world-first virtual advertising at EHF events

First decisions on the road to Paris 2024

FEATURE: Which European teams have already taken a step towards the next Olympic Games and which teams can follow in 2024?

PLAYER OF THE YEAR: World Championship All-stars become the first fixed nominees for the Men's Player of the Year

MEDIA RELEASE: New show with special guests and handball’s biggest stars will be aired every Monday at 18:00 hrs CET

OFFICIAL STATEMENT: Both the Spanish and the Turkish handball federation were fined for the incorrect implementation of the TV graphics duri…

Great Britain advance to next round of EHF EURO 2026 Qualifi…

DAY REVIEW: Great Britain advance to the next round after giving Malta a 44:14 defeat and Cyprus were unable to overcome the difference

DAY REVIEW: Two sides level on three points with one round of EHF EURO 2026 Qualifiers phase 1

DAY REVIEW: British comeback earn them a draw with Cyprus as qualification for the Men’s EHF EURO 2026 has started

Statement on the organisation of Women's EHF EURO 2024

Following statements in Hungarian media related to the organisation of Women's EHF EURO 2024, the EHF issues the following response

TEAM PRESENTATION #4: Great Britain. A young and talented squad should get the team to the next phase for the first time