W17 Championship hots up in Georgia

W17 Championship hots up in Georgia

There is still all to play for at the Women’s 17 EHF Championship in Georgia after the first three days of competition, with three teams close at the top of both groups.

Serbia and Ukraine are looking strongest in Group A, while Switzerland and Lithuania are currently ranked first and second in Group B.

Serbia and Ukraine top Group A after three days of competition, both winning their first two matches. However the Faroe Islands, with one game more under their belt, have three points and are still in with a chance of reaching the semi-finals depending on how the rest of the tournament plays out.

Serbia and the Faroes clashed in the first match of the competition in what turned out to be a close contest. Serbia had a two-goal lead going into the break and extended this to a 30:26 victory by the end of the match, largely thanks to 12 goals from centre back Aleksandra Krstic.

In their second match of the tournament, Serbia had an easier time, beating Greece 24:13.

Ukraine also beat Greece, but by just one goal (19:18) after the Greeks came back from being 5:11 down at half-time. Like Serbia, Ukraine’s second match was simpler and they secured a 30:20 victory against Bulgaria.

On Monday Greece were leading the Faroes by two goals at the break, but the Faroe Islanders fought back to level the match 23:23 by the buzzer. 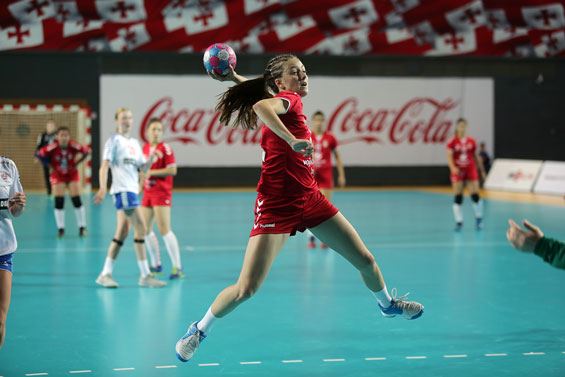 After three days, Switzerland, Lithuania and hosts Georgia all have four points in Group B – but Georgia have played three matches compared to two for the other top-ranked teams.

Lithuania beat Georgia 28:19 in their opening match, and followed up by winning 28:18 against neighbours Latvia.

Switzerland also had a comfortable win against Latvia, taking a 39:20 win.

Their margin against Finland on Monday was even more impressive, with the Swiss surging to a 42:15 victory. They were able to ease off in the second half after winning the first half 25:5.

Georgia handed Finland their first defeat of the tournament on Sunday with a narrow 23:22 result in a low-scoring match.

Switzerland currently hold the largest goal difference of the tournament, with 81 goals in their favour and only 35 conceded.

After a rest day on Tuesday, the tournament continues on Thursday. All the action can be watched live on ehfTV.com and followed on the official website, where the playing schedules can also be found.

The top two teams in each group will progress to the semi-finals on Saturday.