With the business end of the EHF Champions League Men 2020/21 upon us, it is almost time for voting for the All-star Team, presented by Gorenje, to commence. Today, we reveal the first round of nominees, starting with the coach selection.

The coach selection of 10 individuals comes from the votes of 15 of the head coaches in this season’s EHF Champions League Men competition. Ultimately, fans will have 60 names to choose from when the All-star Team vote opens.

The All-star Team will include one player per position, as well as a best defender, best young player and best coach. In this round of nominees, the choice was clear in some positions, while others saw much closer voting amongst the coaches. 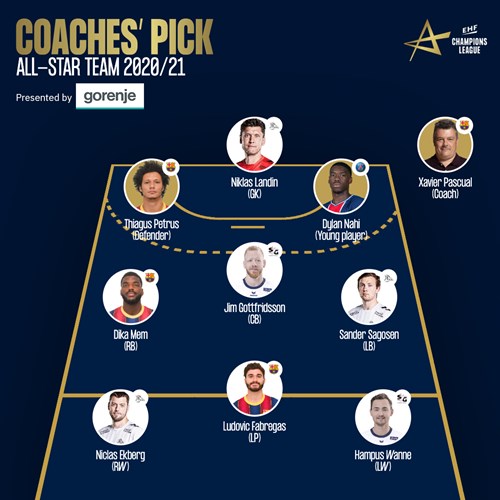 SG Flensburg-Handewitt left wing Hampus Wanne was the standout favourite of the coaches in his position, with 11 votes. He was closely followed by a player for another German side: THW Kiel goalkeeper Niklas Landin Jacobsen, with nine votes.

For right wing and best young player, where Kiel’s Niclas Ekberg and PSG’s Dylan Nahi were nominated, saw the closest race for the coach choice.

Be sure to follow the EHF Champions League on social media and keep visiting us here eurohandball.com as more names on the list of nominees will be revealed on Wednesday. Next up, the selection by All-star Team sponsors Gorenje.

Previous Article Ekberg impresses — but has even more to offer

Next Article Countdown: How the teams are building to the DELO EHF FINAL4

MOTW with Barça and PSG among round 5 highlights

ROUND PREVIEW: French side tested in Barcelona in group B, while Kiel and Aalborg have tough home matches ahead in group A

ROUND PREVIEW: Both teams have not lost in group A yet, while Porto vs Veszprém in group B is the Match of the Week

FEATURE: The Hungarian side and Dinamo’s Brazilian left back are among the star performers in the first three rounds of the group phase

GROUP A REVIEW: Domagoj Duvnjak guided Kiel to their third win of the group phase as Zagreb were no match for the German champions

FEATURE: Faruk Yusuf, the first Nigerian player to score a goal in the EHF Champions League Men, on his journey from Sokoto to Kielce

This is Me: Diego Simonet

GROUP B REVIEW: in an extremely tight fight, Metz snatched two points thanks to a late winner