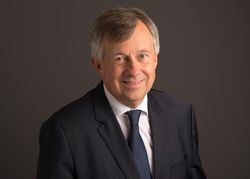 Wiederer: "A congress with huge significance for European and Scottish handball"

On the eve of the 14th Ordinary EHF Congress, eurohandball.com spoke to Michael Wiederer about the main points on the agenda, his expectations and the significance of the event for Scottish handball.

eurohandball.com: What is your expectation ahead of the EHF Congress in Glasgow?

Michael Wiederer: This is not an election congress, but we do have the awarding of a number of major events through to 2024 as well as several strategic and structural decisions. These are changes that cannot be made at an election congress because it is not possible to change both personnel and structure at the same time. In addition to these key decisions, this is also an opportunity to report back to the member federations.

eurohandball.com: These reports will include an update on the new media and marketing contract recently signed with Infront and Perform. What’s the current status of this project?

Michael Wiederer: At the Conference of Presidents, on the fringes of the Men’s EHF EURO 2018 in Zagreb, we provided federations with a detailed rundown of the tender process and the status of the negotiations. The contract was signed at the VELUX EHF FINAL4 in Cologne. Now we can talk about the structural changes we will need to make and the consequences in terms of personnel and sports politics. This is an important topic and we want to ensure that everybody understands how this contract will work as well as the impact this will have on our future.

eurohandball.com: The most important single aspect of the congress is the awarding of the Men’s and Women’s EHF EURO events in 2022 and 2024. How do you see this process?

Michael Wiederer: The nations bidding are all highly competent, and the number of nations has created a complex situation, with for example Denmark/Switzerland and Hungary/Slovakia applying for the men's tournaments in 2022 and 2024 and France/Spain/Belgium and Germany bidding just for one event. The bidding process for the different events is therefore connected and will make for a highly interesting vote.

eurohandball.com: Another objective of the EHF Congress proposals is to strengthen women's handball. What do you expect in this direction?

Michael Wiederer: If approved, instead of having a male-dominated Nations Board, we plan to have two Nations Committees, one for men and one for women. Of course, the current representatives in the Nations Board such as Germany, France or Denmark already do a lot for women's handball, but we want to further develop and promote women's handball – by optimising our structures. In addition, the Women's Handball Board is to be strengthened, and in the future will have the same status as the men’s Professional Handball Board.

eurohandball.com: One topic that has been on the EHF’s agenda for quite some time is a change to the age limit for EHF Executive members...

Michael Wiederer: Yes, and this is a good time to make this change as no acting member of the executive is affected by this decision right now or in the near future. The motions proposes bringing us in line with the IOC and increasing the age to 70. It would then also be possible for congress to extend a member’s remit by up to four years, which would allow us to keep people in the organisation for a longer period of time.

eurohandball.com: At the last congress in St. Wolfgang you were elected EHF president, and many new faces joined the EHF Executive Committee. How has this developed?

Michael Wiederer: The new situation with a full-time president and a new secretary general has developed very well, thanks also to a clear and open communication and clarification of any open questions.

In the EHF Executive we now have many former professional handball players including Stefan Lövgren, Xavier O'Callaghan, Gabriella Horvath, Anrijs Brencans and Narcisa Lecusanu - now replaced by Nodijalem Myaro. We also have two former top-level referees in Henrik La Cour and Ole Jorstad. They all have positions in their own federations and bring a mix of professional expertise and experience to their political positions.

eurohandball.com: In the run-up to the congress, the Executive Committee meets for a preparatory meeting, where, among other things, the participants for the next EHF Champions League season will be awarded…

Michael Wiederer: We prepare over a period of time for the congress and we will complete the final details at our meeting on Monday. This June meeting is also traditionally where the decision on the make-up of the EHF Champions League for the coming season is decided. Ahead of this meeting, the evaluation group has closely examined the candidates and has already made its suggestions. The interest in the results is of course always huge, because it's not just about which teams will participate, but also which teams are seeded in the groups A/B and C/D.

eurohandball.com: What positive aspects can the hosting of the EHF Congress bring to the Scottish Handball Association?

Michael Wiederer: These are two aspects. First of all, you have to see the special situation of the Scottish Association as an associate federation of the EHF. Funding for the sport in Great Britain is provided via authorities in England and Scotland and the Scots are working very hard on the further development of handball.

Secondly, of course, is the participation in European handball. British clubs play in European Cup competitions and next season, for the first time in many years, it will be Scottish clubs competing in Europe. The federation’s COO Stevie Neilson is also the representative of the emerging nations on the Nations Board.

As we did in 2014 with the EHF Congress in Dublin, we want to generate momentum and put handball in Scotland in the spotlight, also because of the interest such an event can generate on a political level. The event is therefore of huge significance for both European and Scottish handball.