The 10th Women’s 17 European Championship will be played between 23 June and 03 July 2011 in the Czech Republic. Playing venues will be Brno with the sport hall Nová Hala Vodova and Zlín with Sportovní Hala Euronics. 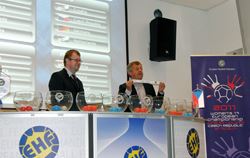 The draw for the final tournament of the 10th Women’s 17 European Championship in the Czech Republic was carried out on Friday, 08 April 2011 at 18:15 hrs at the occasion of the EHF Executive Committee meeting in the EHF headquarters in Vienna, Austria.

Group A
(to be played in Sportovní Hala Euronics, Zlín)

Group B
(to be played in Sportovní Hala Euronics, Zlín)

Group C
(to be played in Nová Hala Vodova, Brno)

Group D
(to be played in Nová Hala Vodova, Brno)

The Women’s 17 European Championship will start on 23 June 2011, which will also be the day of the official opening ceremony. The Preliminary Round will come to a conclusion on 26 June 2011.

The two top teams from each group will qualify for the Main Round (places 1 - 8), while the teams placed third and fourth meet in the Intermediate Round (places 9 -16), which is to be played on 28 and 29 June 2011.

After the conclusion of these two rounds, cross matches, placement matches, semifinals and final will be played between 1 and 3 July 2011.

The detailed match schedule will be finalized and published in the next days.

For more information on the event please visit the official event website. 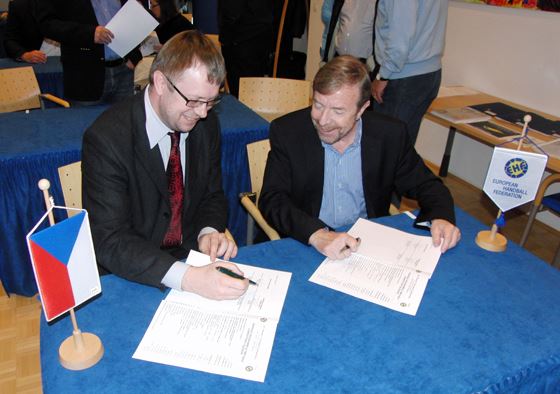 The president of the handball federation of the Czech Republic, Jaroslav Chvalny, and EHF President, Tor Lian, sign the EHF EURO contract.

Next Article Women's EHF EURO 2014 goes to Hungary and Croatia

Get the Women’s EHF EURO look with hummel

All the action from Denmark is on ehf-euro.com

NEWS: Head to ehf-euro.com for all the news and features from the Women's EHF EURO 2020

The clock is ticking

NEWS UPDATE: D-1 until the EHF EURO throw off and all teams are ready to go, after Serbia overcame an early scare and got the green light to…

QUIZ: Who is the EHF EURO all-time top scorer? Which final lasted longest? See if you know the answers in our quiz

A new normal before the EHF EURO 2020 throw off

NEWS UPDATE: The 16 teams competing at the EHF EURO 2020 are getting used to a new normal, with Denmark and Spain relaying positive messages…

All previous winners on board; three Norwegians aiming for f…

FACTS AND FIGURES: All the numbers you need before the start of the Women’s EHF EURO 2020 in Denmark