With the conclusion of the 2017 Women’s 19 EHF EURO earlier this evening in Slovenia, the All-Star Team featuring the very best players has been announced. Eight nations have representatives in the team in what was a highly-competitive tournament. The team also features the ‘Most Valuable Player’ (MVP) position which went to Danish bronze medallist and EHF Rising Star, Kristina Joergensen.

“I earned the award thanks to my good performance especially in the semi-final and final which was the result of good performance delivered by my teammates," said Joergensen after receiving her award. "I will not rest on my laurels though as I am returning home to my club where I will be facing a hard season.” 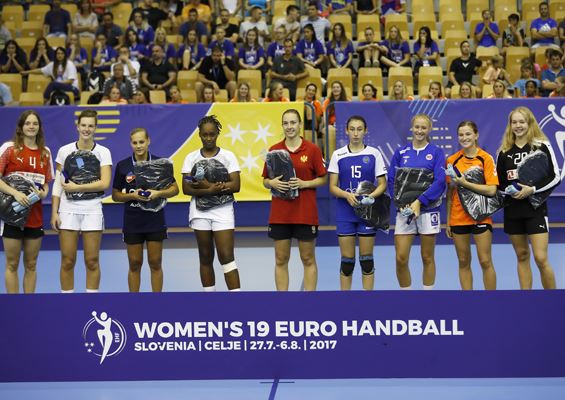 Top scorer at the tournament was Maria Sorina Tirca who scored 56 goals for her Romanian side in their seven games, including 12 in their 9/10 Placement Match against Sweden. Tirca was nine goals clear of the second-placed Jannela Blonbou from France, on 47 goals.

At the initiative of the EHF Women’s Handball Board, all All-Star Team members received a special, personalised t-shirt from Salming Sports AB, the official outfitter of the EHF and EHF Marketing GmbH. The t-shirts contained a special message addressing the players as ‘Young Handball Ambassadors’ in recognition of their promotion of handball in their home countries and further afield.

Slovenia 2017 saw 25% of the 16 teams present coached by women and in recognition of this, the EHF Women’s Handball Board presented Marielle Bohm (GER), Tatjana Jeraminok (MNE), Vigdis Holmeset (NOR) and Ana Seabra (POR) with a special, personalised hooded sweatshirt from Salming Sports AB, the official outfitter of the EHF and EHF Marketing GmbH.

The sweatshirts had a special logo with the logo ‘Handball is in my Heart’ attached, and all coaches received a special message to them as ‘Women’s Handball Ambassadors’ in recognition of their promotion of handball in their home countries and further afield.

To promote the image and passion of young female handball players the EHF arranged a special workshop before the Women’s 19 EHF EURO to with those involved with the tournament to identify the values of the sport when capturing images.

The workshop was run by one of the world’s best, and most experienced, handball photographers, Uros Hocevar, who lives in the Slovenian capital, Ljubljana.

It's the final day of the #W19ehfeuro! Don't forget, that you can follow us also at Snapchat and Instagram!
: ehf_live
: ehfeuro pic.twitter.com/zYIpyttSCq

In addition to this, as is usual, an EHF Mobile Reporters project took place in Slovenia, featuring mobile reporters who provided the images and quotes on the ground managed by Thomas Schoeneich, Media & Communications Specialist from the EHF.

Throughout all the youth events this summer, these projects aim to look at the best way of presenting top women’s handball juniors at their top events, in the best way possible by showing emotions, athleticism, dynamics, aesthetics, femininity, technics and team tactics, all raising the image of the young handball players.

Guys, we're signing off. We hope that you had fun with us for the past 14 days. ;)#w19ehfeuro #thecrew #socialmedia pic.twitter.com/kDjkn8pF0d