Three teams remain unbeaten after five of ten Rounds of the VELUX EHF Champions League. As Zagreb took the fortress Chambery on Sunday, Kiel had enormous problems to overcome Belgrad in the first half. Chekhovskie Medvedi secured their first victory of this season.

50 per cent of the Group Phase of the VELUX EHF Champions League are over – and still FC Barcelona Intersport in Group A, HSV Hamburg in the Group C (both with the optimum of ten points)and Atletico Madrid (9 points) have a clear spot.

In group A now RK Zagreb is Barcelona’s hunter number one after their victory in Chambery. In Group B Madrid and MK Veszprem have left the hunters behind them already – whilst the Russian champions from Chekhov are back on track after a clear victory in Bjerringro. In Group C HSV Hamburg expectedly lead the ranking, and currently the two Balkan teams Metalurg and Cimos Koper are in the best position for the Last 16.

In Group D everything is open again, after Montpellier and Kobenhavn had lost on Saturday. THW Kiel beat Beograd on Sunday and could catch up to the leading trio Leon, Kobenhavn and Montpellier. But Szeged still can hope for the Last 16, too.

Four teams – Bosna, Bjerringbro, Constanta and Beograd – still wait for their first point at the halftime of the Group Phase.

All re-matches of Round 5 will already be played from Wednesday to Sunday.

Josip Valcic secured a highly important away victory for Zagreb some seconds before the end. With eight points the Croats have overtaken Chambery Savoie (6 points) in the ranking – and aside this away victory could be highly decisive for the better position for the Last 16.

The whole game was on the edge – an encounter of two strongly fighting European top teams. Chambery had to replace their injured star Xavier Barachet – another reason for this unexpected home defeat in their “fortress in the Alps”.

The French runners-up had the better start and was leading 11:9 in minute 22, mostly thanks to their goalkeeper Cyril Dumoulin. But when team captain Laurent Busselier was injured and did not return on the field after the break, the Croats took the control of the match.

In minute 42 they were in lead with three goals for the first time (24:21) – and this margin remained until the final stage.

But one thought that the game was decided at the 26:22 for Zagreb, was wrong. Chambery fought back, reduced to 26:27 and still 34 seconds were left. Zagreb took their time-out, and Chambery restarted with a man-to-man defence. But suddenly Valcic was free to the goal and extinguished the French hopes.

Chekovskie Medvedi were classes better than before – and than the opponent -and took an absolutely deserved 35:25 victory. Especially the first half showed a big difference between the teams. Chekhovskie Medvedi started great and was in lead 8:3 after the first only eight minutes. As Bjerringbro-Silkeborg got back and reduced to 8:10 and 10:13 then the disaster for the Danes started as the Russians scored six consecutive goals and pre-decided the game at the break with an eleven goal margin thanks to the great performances of Sergiy Shelmenko, Siarhei Harbok and Timur Dibirov.

In the second half Bjerrinbro improved, but could endanger the guests at any moment. Best Danish player was young playmaker Rasmus Lauge.

Statements after the match:

Vladimir Maximov (coach Chekhovskie Medvedi): In the first half we played well. We felt good and therefore we ended up with a good result. In the second half we were in lead by ten goals and that gave us the chance to try some new things in our game.

Carsten Albrektsen (coach Bjerringbro-Silkeborg): We were never close to a victory. Chekhovskie played very fast and that was hard for our defence to stand up against. Their play was impressing, and we must say that we were not good enough to close them down. In the start of the game we did well in attack, but in the last part of the first half it stopped. Now our chances to go through to the Last 16 are just theory, but we will not stop fighting because we are a good team who are fighting to the end and we also have to remember that we represent Denmark. 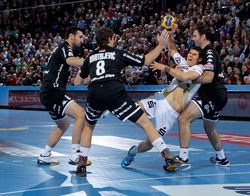 What sounds like a clear and expected result was a game of two completely different halves: It were absolute unusual sounds for the THW players, when they went to the dressing room at the break, as a lot of spectators whistled and shouted against their team.

Beograd had shown outstanding 30 minutes with spectacular goals, high efficiency in fast breaks and a stone solid defence. Kiel did not find their rhythm, caused unusual mistakes and were below at the break.

In the first action of the second half Beograd extended the lead to 19:17 – but then the lights went out. THW coach Alfred Gislason found the right words in the dressing room and made a decisive decision by changing the goalkeeper to the newly awarded “EHF living handball legend” Thierry Omeyer. In the first 22 minutes of the second half the Frenchmen saved incredible 75 per cent of all Beograd shots – and THW turned a 17:19 to a 29:21 and later a 35:25. Beograd was totally shocked – and Kiel played as cold as ice.

Thanks to this victory Kiel overtook Szeged in the ranking and reduced the distance to Leon, Kobenhavn and Montpellier. Beograd still wait for the first points, but showed a great sign of life in the first half. Top scorer was Hendrik Lundström with eight goals.

Kiel have the edge in first power ranking

POWER RANKING: Right before the start of the EHF Champions League Men 2021/22 season we ask: who is hot and who is not?