The 20 teams still in the race for the last 10 European tickets to the Women’s IHF World Championship 2021 know their final obstacle on the road to Spain.

On Monday, the draw for the play-offs determined who will be playing who in the all-decisive ties, with the first leg scheduled for 16/17 April and the second leg for 20/21 April.

The draw coupled the 10 best-ranked teams from the EHF EURO 2020 which have not qualified directly for the World Championship, with the 10 teams that advanced from qualification phase 1, which was completed on Sunday.

Four-time champions Russia, who last lifted the trophy in 2009, will take on unheralded Turkey, who have yet to qualify for a finals tournament.

Among other past world champions, Germany (1993) have been handed Portugal as opponents, Hungary (1965) are up against Italy, and Romania (1962) have been drawn against North Macedonia. 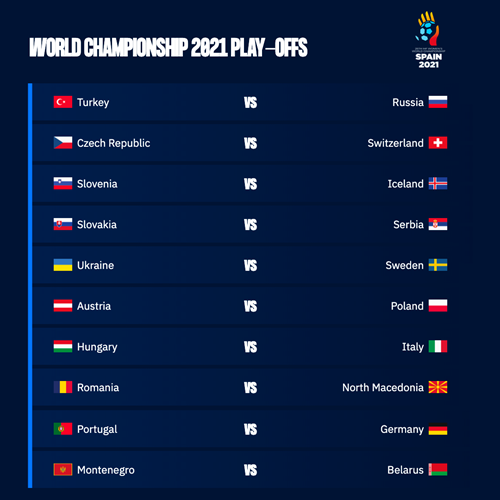 The 10 winners of the play-offs will join the six teams from Europe that have already been guaranteed of their place at the World Championship: host nation Spain and defending champions Netherlands as well as the four best-ranked teams from the EHF EURO 2020 - Norway, France, Croatia and Denmark.

A total of 32 nations will participate in the World Championship, which takes place on 1-19 December 2021.

Next Article Summary: Plock grind out vital win at Sporting

DRAW PREVIEW: The draw for the play-offs in Women’s World Championship 2021 qualification will take place on 22 March

ROUND PREVIEW: Europe’s 10 remaining places at the Women’s World Championship 2021 are on the line in the play-offs, with coverage on EHFTV