A colourful player in orange

Gifted Lois Abbingh is one of the rising stars on the horizon of Dutch handball. The 19-year-old left-back played a marvelous U19 tournament last summer in her home country, and also in the recent preparation matches against Tunisia and Norway. The youngster played a significant role as the Dutch team gained good results against the Olympic Champions.

In this interview with ehf-euro.com Abbingh introduces the successful ‘HandbalAcademie’ program of the Dutch federation and talks about her side´s short-term, and long-term aims.

ehf-euro.com: Last month you played in a series of preparation matches against Tunisia and Norway. What are your reflections on those matches?

Lois Abbingh: I think the last few matches were pretty good. We had to deal with several injuries, so the squad changed a little bit. But despite that, we played very strongly as a team. Everyone knows their strengths and which job to complete on court.

ehf-euro.com: You´ve an amazing new generation with several gifted U20 players that recently celebrated great successes in Europe. What is the secret behind the great number of upcoming ’super players’ in the Netherlands?

Lois Abbingh: I think the successes of the young national teams stem from the creation of the ‘HandbalAcademie’, which I also enjoyed being part-of for two years.

We trained twice a day and played a lot of national and international games. It was possible for the girls who hadn’t played international games with their club to play in the Challenge Cup with the ‘HandbalAcademie’. So we all reaped the benefits of that.

Also, we trained every day together with the U18 and U20 players, so when there was an upcoming tournament, we’d get to spend a lot of time preparing for these tournaments. 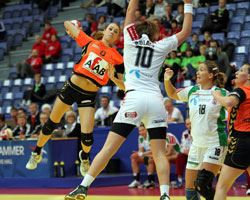 ehf-euro.com: Most of the national team players play either in the Netherlands or in Germany. What is it like to play in a foreign league at such a young age? What is the environment like at your club Oldenburg?

Lois Abbingh: The fact is that the domestic competition in the Netherlands is not that strong, so it wasn’t a hard choice for me to make the move to Germany.

I always wanted to improve myself and make myself a better handball player. Going to Oldenburg was the right decision for me.

Playing at such a young age in a country other than your own, means that you have to prove yourself to the club, the trainers, and also the audience. They didn’t expect too much from a 17-year old girl, but I hope I’ve proved myself to them!

The environment is very good at Oldenburg. There are a lot of people who are very supportive of the team and club.

ehf-euro.com: How would you rate the German league? Is it the right place for you to develop your skills?

Lois Abbingh: The German league is, of course, one of the best competitions in the world, with many great players. At the moment, I think it’s the right place for me to develop further.

In every match you have good opponents, but although it’s a good competition, I think it’s also important to play internationally. It’s good to play against clubs from different countries and that’s why I learned a lot last year in the EHF Cup with Oldenburg.

It’s really sad that we didn’t have the financial resources to play in the EHF Cup again this season. I personally miss those kind of games.

ehf-euro.com: Turning to the next hurdle, the World Championship will take place soon in Brazil, and insiders quote the Netherlands as a possible surprise team of the tournament. Do you agree with the "dark horse" role of your national team, and what are your personal expectations and the team´s goals at the world event?

Lois Abbingh: I think it’s a good role for us. We proved in the preparation games that we can be equal to the best teams of the world.

But to manage that we have to play the full 60 minutes with top concentration and really use our strengths as a team. We really want to finish in the top 7 and play qualification matches for the Olympic Games in London.

ehf-euro.com: It’s well-known that parents, family and close friends often travel with the team to junior / adult events, transforming the supporter area into a sea of orange. How important is it for you and your colleagues that the family support the playing of handball at a professional level?

Lois Abbingh: We always have many supporters at international events, and that’s very nice for us to see. For me, my family is very important, and I really enjoy it when they are with me at games and events. I think seeing and hearing ‘the orange area’ gives us more power to achieve our goals.

ehf-euro.com: In 2012 the Netherlands will welcome the elite of European handball for the EHF EURO. Although it’s still one year away, how do you feel about the tournament, and that you´ll play in front of your own spectators and families?

Seeing all those people supporting us, in the colour orange of course, makes you more and more motivated. We want to show that a small country such as the Netherlands can also play a leading role in such a wonderful and worldwide sport as handball.

Join the growing community of fans of the event on Facebook!
www.facebook.com/NED2012