Great unity the key for success

Hungary finished in seventh place at the World Championship in January 2011, and with this, coach Lajos Mocsai´s team has secured a spot in the Olympic Qualification tournament. Even so, the Hungarians aim to repeat their WCh result and continue their success story.

Line-player Szabolcs Zubai talks to ehf-euro.com about his side´s aims for the continental event and sums-up the happenings at the recent Four Nations Cup tournament.

The competition, Serbia´s dress rehearsal prior to the European Championship, was won by Zubai and his colleagues in an impressive manner, ahead of Croatia, Serbia, and Czech Republic.

ehf-euro.com: Some weeks ago the Hungarian NT won the Four Nations Cup in Serbia. Are you satisfied with your team's performance and the infrastructure of the host country of the EHF EURO 2012?

Szabolcs Zubai: In Serbia we were in top form and won a very strong tournament against the other three participating teams. To finish above all of them was a great result.

I was totally satisfied with the facilities provided in the three cities in which we were playing. We had a police escort to every site, so we never had long to wait.

We were accommodated in nice, comfortable hotels, and I also liked the sports halls. Maybe the food could have been a little more varied, but overall, everything was fine.

It looked to be a very good base for the EHF EURO. I think they’ll fix a few small things before the event, but it was a great dress rehearsal for the organizers, and also for us!

ehf-euro.com: The Hungarian NT is mainly comprised of players from two teams, Veszprém and Szeged, and the coach is Lajos Mocsai, who is also the trainer of Veszprém. Do you think this is an advantageous situation?

Szabolcs Zubai: I guess it can be a positive thing. Most of the guys are playing together during the season, so we get to know each other better.

Our connection is also better on the court, as we feel and know each other's thoughts. This is a very much a unified team, and its greatest strength is its good community spirit. 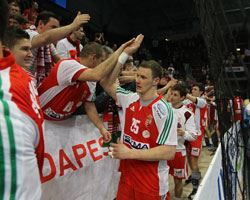 ehf-euro.com: You are in quite a difficult group at the tournament, as France and Spain are really strong, and Russia will run for the Olympic qualification places. How would you describe your chances and what are the expectations for your team?

Szabolcs Zubai: We are surely in the strongest group! The first match against Russia will be the most important to win.

If we can qualify from our group we will face Iceland, Norway, and some other team who are on the same level as us, so maybe we can beat them.

If we are lucky, and can beat some stronger teams, we could be among the best eight teams at the end. But anything can happen, and I guess there will be many matches with only a one-goal difference at the end.

ehf-euro.com: Your team has already qualified for the Olympic qualification matches, so there is no pressure on your shoulders. Do you think this is an advantage?

Szabolcs Zubai: Yes, this is very important, and that’s why we were very happy at the World Championship.

Now we have to focus to achieve a much better place at the EHF EURO in order to get a much easier qualification group. At the moment it looks like we have to travel to Denmark or Spain, but it would be much better to play in Sweden. Maybe that looks like the easier group.

ehf-euro.com: Which are your four favourites for this EHF EURO? What is your opinion of the host nation, Serbia?

Szabolcs Zubai: I expect France, Spain, and Denmark in the last four. I have no idea who could be the fourth team. If Serbia can beat Poland in the first match they can march forward nicely. I guess their fans can give them a huge boost.

Ticketing is managed by the Serbian Organising Committees. Should you need further assistance for buying your tickets, please contact via email: tickets@rss.org.rs

Find more information on the tournament on the official website www.ehf-euro.com/SRB2012/

Join the growing community of fans of the event on Facebook www.facebook.com/SRB2012

Next Article Ilic back in Serbia

EURO CUP REVIEW: Montenegro went through ups and downs, but in the end cruised to a home win against North Macedonia

ROUND 2 REVIEW: Despite Julia Maidhof's ten goals, Germany earned only one point against Belarus

ROUND 2 REVIEW: After trailing by one goal at half-time, Hungary improved after the break to claim a two-goal victory

ROUND 2 REVIEW: Olympic champions France struggled in Sumy, but in the end snatched two points against gritty Ukraine

Bazaliu saves a point for Romania with last-gasp shot

ROUND 2 REVIEW: In a high-octane match in Vienna, Romania secured a draw against Austria, 33:33, after Bianca Bazaliu scored with two second…

ROUND 2 REVIEW: Las Guerreras did not have it easy against Portugal, but still won their second game of the group, 23:22

ROUND 2 REVIEW: Three days after a heavy loss against Sweden, Iceland shocked with the biggest upset so far, a 23:21 win against Serbia

ROUND 2 REVIEW: Despite Marketa Jerzabkova's 11 goals for Czech Republic, Croatia claimed their first points in qualification

Norway double up against Slovenia

ROUND 2 REVIEW: Denmark had few issues in disposing of the Faroe Islands, clinching their second win of the group, 39:19