A data-driven preview of the final

Data provide unique insights in handball matches and players. Data analyst and journalist Julian Rux will share his findings on a regular basis during the Women’s EHF EURO 2022. Today the fourth episode: a close look at both finalists.

Norway are good on both ends

In the first semi-final, Denmark, who were clearly favoured according to the numbers, prevailed against Montenegro. In the second semi-final Norway won the battle of the best defences of the tournament. Even though they won, their defence is with 27.0 goals per 50 possessions still slightly worse than France’s and slightly worse than they were two years ago when they won the EHF EURO 2020.

Thorir Hergeirsson’s team is good but not outstanding at forcing turnovers. Four teams are better than the 12.8 technical faults their opponent’s made per 50 possessions. The shooting percentage of 64.0% that they allow, is the second lowest. Especially at penalties throws they are outstanding. Their opponents have just succeeded on 63.3% of their attempts there.

Accordingly, the statistics of their goalkeepers are very good as well. Together, Silje Solberg and Kathrine Lunde saved 36.8% of the shots on their goal. Solberg, who was with 41.2% saves one of the main reasons for their win against France, even leads all goalkeepers with a save percentage that is even beter: 42.4%. 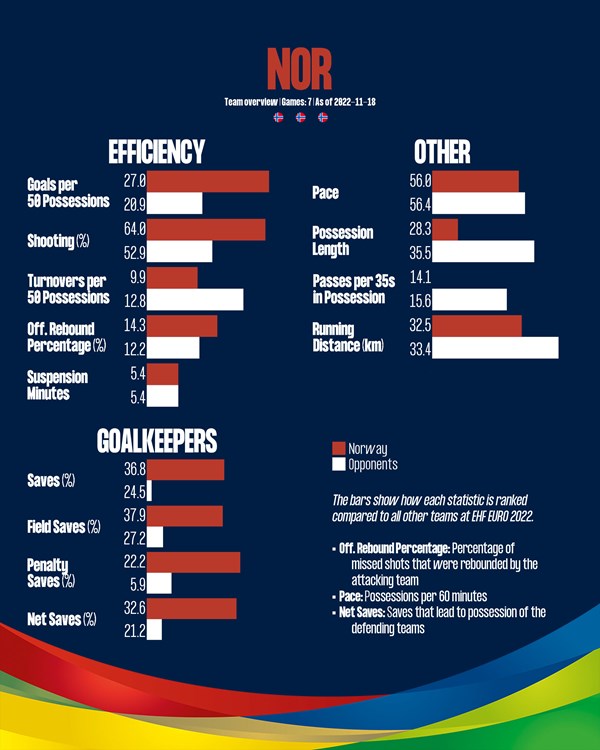 Their good defence forces their opponents to long possessions. Only those of the opponents of Denmark are minimally longer. But, hereby, the reigning world champions make their opponents run as much as no one else with 33.4 kilometres per game.

With 27.0 goals scored per 50 possessions they are second-best in offence as well. Again, that’s slightly worse than in 2020. While 9.9 turnovers per 50 possessions is fourth best, they lead the tournament in shooting percentage with 64.0%. Especially at penalty throws, they are very reliable as 88.9% of their attempts found their way into the net.

Another problem for the defending champions are first wave fast breaks. Just 63.6% of them were converted, only North Macedonia are worse. However, overall, their field goal percentage is still fourth-best with 61.0%.

Their shot chart is very colourful and gives many insights: They are inefficient on the back positions on the right side from the playing direction, while in the centre and on the left side they are very efficient.

In addition, their percentages from the more acute angles are not that good as well. But they shoot less than average from there and instead more from the generally more efficient central positions. Also, from 6.5 to 8.5 metres they shoot extraordinarily. Overall, they score on 60.9% of their attempts from there which is 11.4 percentage points better than the average. 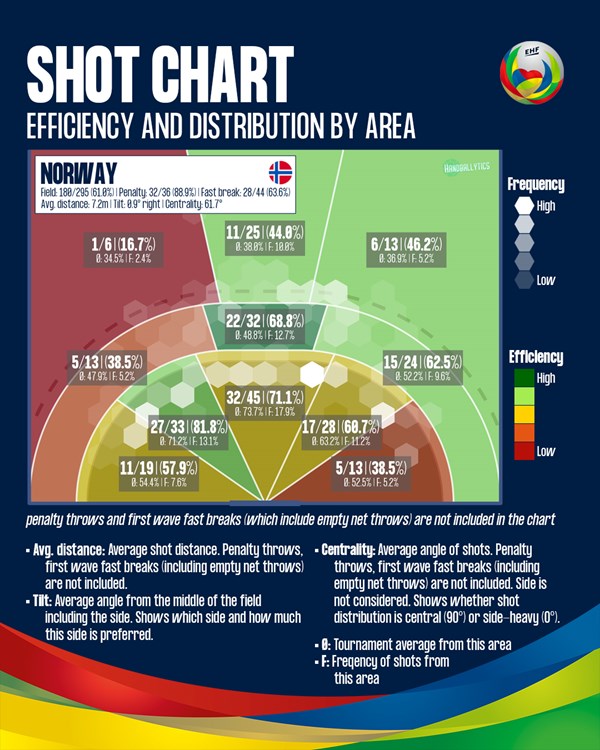 Norway also have outstanding individual players. They are the only team that has four players with at least four goals per game in Henny Reistad (6.1), Nora Mørk (6.0), Stine Oftedal (4.4) and Vilde Ingstad (4.0).

Denmark’s clear strength is their offence. Scoring 27.2 goals per 50 possessions, they are better than anyone else. Their defence may be ranked fourth with 23.3 goals conceded per 50 possessions but the difference to first-placed France is bigger than to the worst defensive team amongst the main round teams, Romania.

Although Jesper Jensen's team forced their opponents into the second-longest attacks, they were not able to profit from that. Their biggest problem is that they only forced 10.3 turnovers per 50 possessions, one less than the average. The fact that they are the team with the second most suspension minutes doesn't help either. 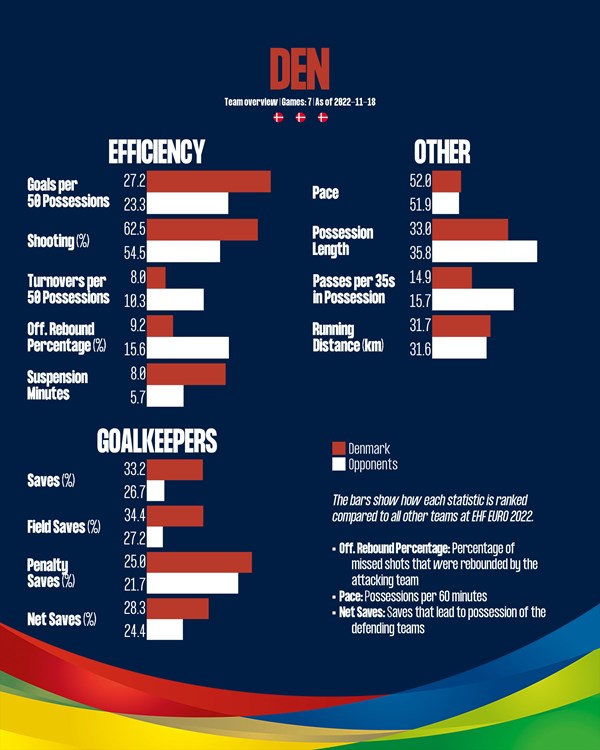 Their opponents' shooting percentage looks better. With 54.1% they are in fourth place here but practically on a par with second-place Norway.

Accordingly, the goalkeepers of Denmark also do a good job. Althea Reinhardt has saved 35.9% of the shots on her goal and is ranked third in save percentage. Sandra Toft, who played twice as many minutes as Reinhardt per game, saved 32.0% and is on 10th. Both is good, but not on the outstanding level of Norway.

However, as mentioned, they are the best team in attack. Here, turnovers are their great strength as they take care of the ball better than any other team with only 8.0 technical faults per 50 possessions.

In terms of shooting percentage, however, Denmark is in fourth place with 62.5%. They have one big weak spot: penalty throws. Just 64.3% of their attempts found their way into the goal. That’s the worst amongst all teams at EHF EURO 2022 and on the complete other side of the spectrum than Norway. Against Montenegro, they also scored only two out of four.

Excluding penalty throws and only looking at attempts from the field, their shooting efficiency is the best with 62.3%. Their shot chart which is way less colourful than Norway’s shows their big strength: They are very balanced and at least solid from everywhere (mostly slightly better than average). 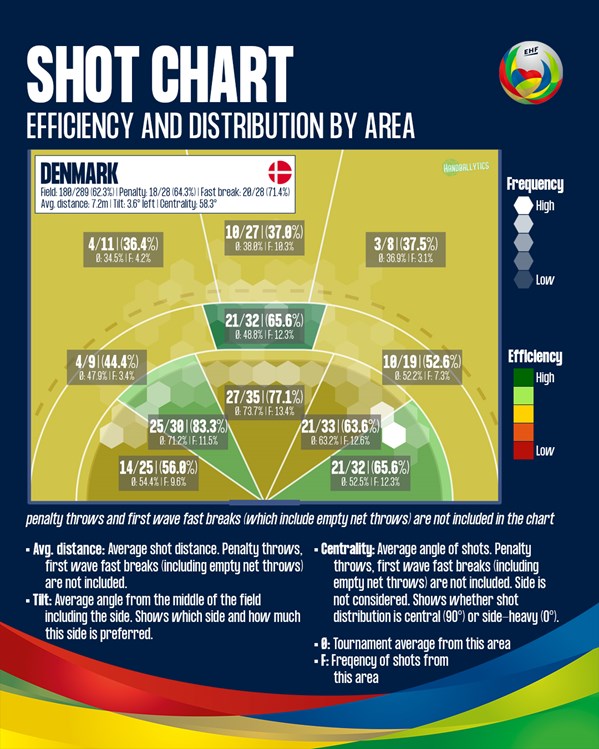 Their sweet spot is similar to Norway in the centre between 6.5 and 8.5 metres. From there Denmark have scored on 65.5% of their attempts, while the average is just 48.1%, but they are trumped there by their Scandinavian neighbours who even score 68.8% from there. What also helps Denmark’s efficiency is that, overall, they shoot 2.2% less from more than 8.5 metres where the least efficient shots come from.

The best individual scorer for Denmark is Emma Friis with 5.0 goals per game. 3.9 of her goals are from the field. That’s the best value of her team as well and at the same time the lowest number compared to the best field goal scorers of all other teams. That shows again how balanced their attack is.

Denmark know how to beat Norway

Overall, Norway’s numbers are slightly better. But they are not nearly as dominating as they were two years ago. Denmark, however, have been on a roll since their loss in their first tournament match against Slovenia and have already won against Norway in the main round.

As it’s usual for games with Norway, they forced the Danes in their encounter into long possessions and had short ones themselves, but they were not able to capitalise on that. Stine Oftedal and her teammates were even able to force three more turnovers, but the better shooting and better goalkeeper performance made the difference for Denmark.

Interestingly, penalty throws were one of the difference makers. But while during the rest of the tournament Norway was outstanding at shooting and saving penalties and Denmark had big problems, in their match it was the other way round. While Denmark was perfect on four attempts, Norway scored only five of seven. The defending champions have not lost any other penalty duel in the current EHF EURO.

Thus, it's hard to imagine that this will happen again. But besides that, both another win by Denmark with their strong attack or a title defence by Norway with their strengths on both sides of the field both likely.

Previous Article SUMMARY: All set for the final day of the EHF EURO

OFFICIAL STATEMENT: Both the Spanish and the Turkish handball federation were fined for the incorrect implementation of the TV graphics duri…

Great Britain advance to next round of EHF EURO 2026 Qualifi…

DAY REVIEW: Great Britain advance to the next round after giving Malta a 44:14 defeat and Cyprus were unable to overcome the difference

DAY REVIEW: Two sides level on three points with one round of EHF EURO 2026 Qualifiers phase 1

Stine Oftedal, leader of the young ones

FEATURE: All-star centre back Stine Oftedal speaks about her role in the rejuvenated Norwegian team before the final against Denmark

FEATURE: Denmark have seen increasing success in recent years and their approach off the court has been important in that

SUMMARY: Coverage of day 15 of the Women's EHF EURO 2022, with both semi-finals and the match for fifth place in Ljubljana

Denmark clinch top of group I with statement win

GROUP I REVIEW: Denmark defeated Norway for the first time since the EHF EURO 2012, 31:29, to secure first in the group

SUMMARY: Coverage of the last day of the main round at the Women's EHF EURO 2022, with six matches in total in Ljubljana and Skopje