Croatia keep France out of main round at M19 EHF EURO

Hosts Croatia qualified for the main round of the Men's 19 EHF EURO 2021 at the expense of France with a narrow 26:25 win in their preliminary round closer on Sunday.

Slovenia and Iceland from group A as well as Portugal from group D also advanced, completing the line-up for the main round, which starts Tuesday.

The quartet joins Sweden, Spain, Denmark, and Germany, who had already progressed after the second round of matches in the preliminary round.

Slovenia in group I and Croatia in group II are the only teams to start the main round with the maximum two points. 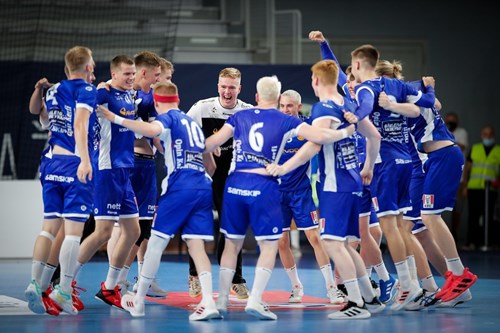 The entire event is streamed live on EHFTV. Also, the Home of Handball social media channels on Twitter, Instagram and Facebook as well as the reports on eurohandball.com keep fans up to date throughout the event.

Next Article Respect Your Talent is in full flow this summer

DAY REVIEW: On the second day of action, four teams booked their places in the main round at the Men's 19 EHF EURO 2021

DAY REVIEW: The first day of the Men's 19 EHF EURO featured a few high-scoring affairs and one big surprise

PREVIEW: The Men's 19 EHF EURO 2021 begins on Thursday with 16 teams competing in Varaždin and Koprivnica

DAY REVIEW: Spain join Slovenia, Germany, and Croatia among the last four of the championship

DAY REVIEW: The opening main round games at the M19 EHF EURO did not disappoint

SEMI-FINAL REVIEWS: Germany won an exciting first semi-final by one goal, while hosts Croatia also booked their place in the final

PREVIEW: Austria, Iceland, Serbia, Slovakia, and Slovenia will play a qualification tournament in Serbia in November 2021

NEWS: The two countries lead the Younger Age Category ranking after all W17, W19 and M19 events this summer have been played