Džomba: "Veszprem success not a surprise, Kielce is a time-bomb" 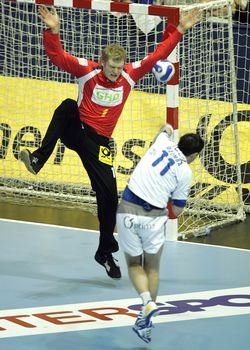 Džomba: "Veszprem success not a surprise, Kielce is a time-bomb"

Mirza Džomba has played 14 VELUX EHF Champion League seasons, with four teams that are playing in this season's competition.

Džomba played in the final with Zagreb, Veszprem, and Ciudad Real, and was champion once with Ciudad Real.

Mirza Džomba is known as a handball legend and one of the best right wingers in the game, winning the World and Olympic titles with Croatia.

Today in retirement, Mirza has decided to avoid involvement in handball for the moment:

“It's not the right time yet. I've got to find something that I can help with. I do not want to be here for nothing.

“I'm in Rijeka, committed to family and a little bit in my own business, enjoying life.”

ehfCL.com: What do you think about this season's VELUX EHF Champions League?

Mirza Džomba: There are no big differences. Everything is more or less what I expected. There are some new things but it's not time to look back at the season yet.

Kiel, Barcelona and Atletico are among the top teams again, even if some of them are dealing with complications at the moment.

Barcelona is improving after acquiring some new players, Atletico have fallen a bit due to problems with goalkeepers and defence, and Kiel is of course as strong as always.

ehfCL.com: Most pleasant surprises are your teams, Veszprem and Kielce.

Mirza Džomba: Yes, but I have to say again that there is still half of the season ahead. Veszprem have done a great job because they're leaders in a group with Kiel and Atletico, which says a lot about their ambition.

This year they have finally set everything they were doing for the last 20 years in place, so it's not a big surprise. They have a great team.

Kielce is, in my opinion, a time bomb waiting to explode. Like Copenhagen last season, they are a club with a vision.

They are investing a lot of money and this year they bought the right players and I won't be surprised if they make it to the FINAL4 in Cologne this season. Although, the group and knock-out matches are not the same.

To sum up, I believe it's good for the competition to have two new strong clubs; it will make everything more interesting.

ehfCL.com: What do you think about Croatia Osiguranje Zagreb's performance this season?

Mirza Džomba: Zagreb looks very good. Considering what they have invested, they have got a lot in return.

Five months ago, nobody knew who these players were, and now they are starting to belong at the top.

Speaking of their losses, they need to stay in reality, even Atletico Madrid have lost some matches, so losing should not be a big deal.

But the fact that they were keeping up with Berlin for 120 minutes implies a lot. This is a healthy start for them after their hard financial situation.

If they manage to get Duvnjak back they will be 30 percent stronger. What I'm trying to say is that this team needs one great reinforcement to reach the top.

ehfCL.com: Were you watching the Olympic Games in London?

Mirza Džomba: I was. France were the best, Croatia were the next best after them and it's such a shame that we had to play against France in the semi-final.

ehfCL.com: The World Championship in Spain is ahead of us?

Mirza Džomba: I'm not expecting anything spectacular. It's a question of who'll be able to play.

France is having a lot of difficulties, and without the Gille brothers and Fernandez, it will not be the same.

Besides, Croatia were probably the favourite to win in London. At the World Championship, Croatia also needs to see who'll be able to play. Nobody will be without problems, there are a lot of injuries.

So, a lot will depend on who will get to Spain with the best and healthiest team.

ehfCL.com: And the other teams?

Mirza Džomba: Spain as host will surely be one of favourites. The great work in younger categories is beginning to come to fruition for Denmark and Sweden, but it is again a question of who'll be able to play. Nothing happens overnight.