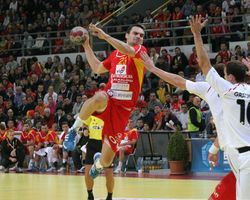 Days after Zvonko Shundovski announced the list of 28 players for the 2013 World Championship in Spain, he shortened the list by eight, inviting 20 players to participate in FYR Macedonia’s preparation process before leaving for Seville.

Alushovski was the last of a generation who played the first official match for Macedonia in 1993. Since then has missed only one qualifying round, and some matches due to injury.

The only true rookie is left wing Goce Ojleski, while the others have played for the national team.

According to the team’s plan of preparation, FYR Macedonia will be in Rovinj, Croatia from 21 December, where they will play a test match against Saudi Arabia.

Two more test matches are scheduled against Serbia and Egypt, on 4 and 5 January, 2013 in Niš.

Previous Article Džomba: "Veszprem success not a surprise, Kielce is a time-bomb"