EHF and Infront Sports & Media to continue successful partnership until 2020

EHF and Infront Sports & Media to continue successful partnership until 2020

Infront has been responsible for the television distribution and marketing for the EHF EURO events since 1993. Its contribution to European handball has been considerable, ensuring the successful development of the top EHF events. These are now broadcast in important television markets throughout the world and offer strong, tailor-made marketing opportunities for sponsors.

EHF President, Tor Lian, said: “In our experience, partnership has meant progress. Our relationship with Infront has helped us to develop the EHF EURO events significantly over the years and this is why we want to maintain continuity. We have chosen to prolong our marketing partnership with Infront early, based on a state-of-the-art business model, in order to ensure stability and allow for long-term planning.”

Infront's President & CEO Philippe Blatter said: “This agreement up to 2020 is a remarkable demonstration of trust in Infront and we will do everything possible to make good use of this opportunity to ensure that the EHF EURO events continue to flourish in the long term on an international level. We have already extended many key media rights agreements to cover the EHF EURO to 2015 and we can now continue to look at all aspects of the marketing of the events with a longer perspective.” 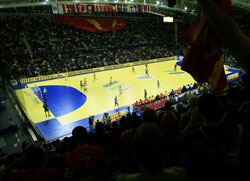 The new agreement between the EHF and Infront will again include the provision of additional technical services to further raise the profile of the events and make them more appealing and accessible to fans. These include the management of the event websites, the television graphics, speed measurement for goal shots and an improved online scouting service for match statistics.

Infront has increased the television coverage of both the Men’s and Women's European Handball Championships significantly since the inception of the events in 1994. The television results for the latest men’s and women’s events together have achieved a total cumulative television audience in excess of 1.5 billion, which is an all-time record for the events. The 2008 men’s event had more than 1.2 billion viewers, which also set a record for a single EHF EURO event.

For the up-coming four tournaments, Infront has already concluded long-term agreements with broadcast partners in major handball markets in Europe:

In 13 European countries Infront has already sold media rights to EHF EURO until 2015.

The commercial hierarchy for the EHF European Championships has three categories of involvement: Official Sponsor, Official Supplier and EHF Partner. This hierarchy has been developed to provide a variety of entry levels with tailor-made marketing opportunities for the companies taking part. Since the inception of the tournament, Infront has marketed the Official Sponsorship packages with complete success, with a comprehensive rights package including official designations, advertising boards, floor advertising and arena signage, promotional rights and hospitality.

The official website of the European Championships (www.ehf-euro.com), which has been developed in conjunction with the EHF, has added considerably to the enjoyment of fans. The platform gives extensive information about the events, participating nations and players, as well as online video coverage of the event. In 2008 the website of the Men’s tournament received 5.8 million visits from the beginning of January to the end of the event. This was three times that of the 2004 event website – another tournament record.

The official event section for the 2010 Men’s European Handball Championship has already been launched within the official website; the next highlight will be the live ticker direct from the 2009 final draw, which will take place in Vienna, Austria on 24 June 2009.In future, the online platform will be online and regularly update also in the periods between the EHF EURO events.