Elohim Prandi is developing at a dazzling speed. The USAM Nimes left back is taking two steps at once this season, where he made his Men’s EHF Cup debut in October and is currently part of the group phase.

He also made his debut at the EHF EURO 2020 in January.

“I’ve always aimed high. Maybe I did not expect to play for France that early, but I’ve been gaining a lot of experience lately and that’s obviously good,” says Prandi (21), who is the son of two former French national team players.

His behind-the-back goal against Rhein-Neckar Löwen in Nimes EHF Cup group phase opener last Sunday went viral and ended up as the No. 1 in the EHF’s Top 5 Goals.

Prandi produced some magic again in the French domestic league on Wednesday night with a stunning 12-metre goal against US Créteil HB.

“I don’t think about it and I definitely don’t practice scoring behind-the-back goals,” he says with a laugh.

“In the heat of the moment, whatever I feel is the right thing to do, I try it. And if the ball ends in the goal, then it’s good,” he adds.

⚠️GOAL OF THE SEASON CONTENDER ALERT⚠️@RNLoewen may have taken a valuable win... but the moment of the match belongs to @ElohimPrandi of @USAMNIMESGARD for this INCREDIBLE behind-the-back goal! Stunning stuff in the #ehfcup pic.twitter.com/GEhPIu1sH1

Prandi says much of his recent progression this season, his third in Nimes, has to do with the arrival of Michaël Guigou at the club.

After 20 years in Montpellier, the international left wing and two-time Champions League winner moved to Nimes last summer, and immediately shared all his experience with his new teammates.

“It feels like he’s taken me under his wing,” Prandi says. “We have a very strong bond, ‘Micka’ is not hesitant when it comes to putting me back on the right track sometimes.”

A lot calmer than he used to be

Prandi has become a lot calmer than he used to be. The French wunderkind sometimes looks like he is out of control, playing on his own without too much thinking.

But things are actually quite the opposite.

“I think a lot about what I do, I ask myself a lot of questions,” Prandi says. “I’m a perfectionist and I’m my own worst judge.” 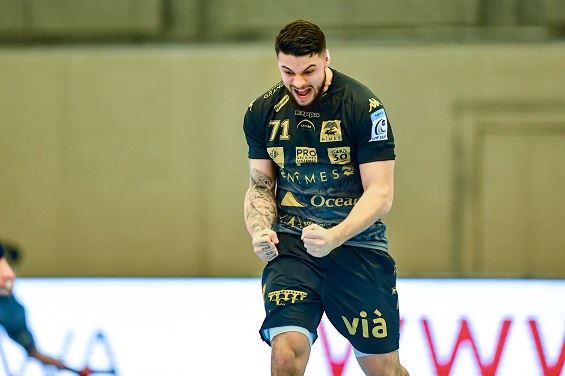 Looking back the EHF EURO, Prandi says that “he did not bring what he expected from himself,” underlining his impatience to become an even better player.

While he is set to continue his career with Paris Saint-Germain HB in the VELUX EHF Champions League for the next three seasons, Prandi is focusing on Nimes’ EHF Cup campaign.

Nimes host Liberbank Cuenca on Saturday (live on ehfTV.com at 18:30 CET) as the French side will be eager to earn two points, after Prandi’s awesome goal could not avoid a one-goal defeat (32:31) against Rhein-Neckar Löwen last week.

“A draw might have been fair, but we tried to take the positives out of this loss,” Prandi says. “We played very well against the favourites in the group and even in the whole competition. We have to use that to win our first home game this weekend.”

Previous Article Mikhaylichenko: “I don’t want to know what the future holds for me”

Next Article Drammen chase the dream; former winners aim to finish the job

GROUP B REVIEW: TTH Holstebro fought back from a four-goal deficit to take the lead, but in the end, USAM Nimes Gard earned their first EHF…

GROUP B REVIEW: European debutants USAM Nimes Gard were close to snatching the win from Rhein-Neckar Löwen who managed to ride the storm at…