Frey: “I am not even thinking about the EHF FINAL4 yet”

Frey: “I am not even thinking about the EHF FINAL4 yet”

Team Esbjerg have a decent chance to finish first or second in group 1 of the DELO WOMEN’S EHF Champions League – and therefore earn home right in the quarter-final return leg.

The door to the DELO WOMEN’S EHF FINAL4 could be wide open for the Danish champions. However, playmaker Sonja Frey is reluctant to speak about that option.

"We have to do our job first"

Team Esbjerg will host group leaders Metz Handball in their last main round match on Sunday (live on ehfTV.com at 16:50 CET) as the Danish champions can still finish in first, second or third place (see group 1 calculations).

“We have to do our job first. Then, we can think about what came out of it,” Frey says. ”It is a bit like skiing: you have to take one gate after the other. If we make it to the EHF FINAL4, we can talk about that. Right now, there is still a long way to go.” 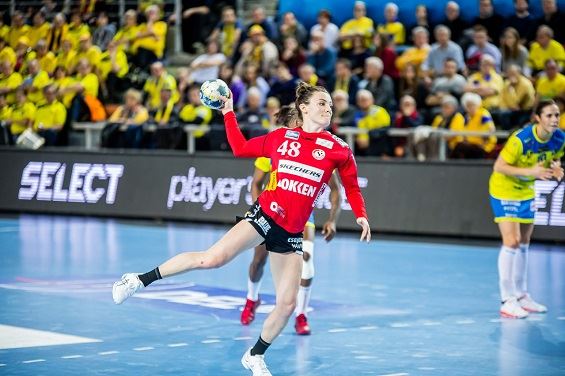 Frey joined Team Esbjerg from Paris 92 in the summer of 2019. She got more responsibility than expected from the start, as the team’s other centre back, Annette Jensen, tore her anterior cruciate ligament before the first competitive match.

It gave Frey more court time than she might have expected.

”I definitely do not complain about playing,” she says, laughing. “I want to play as much as possible.”

Also, adapting to Esbjerg’s way of playing has not been difficult for her.

“Of course, Esbjerg play much differently from Paris, but it was not difficult to become familiar with the way our coach, Jesper Jensen, wants to play,” Frey says.

“And the girls here have also been very helpful, so everything about my change from France to Denmark has actually been fine,” she says, before adding with a laugh: “Except for the weather.”

An interesting type of player

Esbjerg head coach Jensen, who was announced as new Danish national team coach this week, is happy with his playmaker.

“She is a really interesting player and one of the types of players we liked to add to our team,” Jensen says. “Sonja is good at adding speed to our attacking play and doing the unexpected when we need it.”

Regardless the outcome of Sunday’s match against Metz, Team Esbjerg have already qualified for the quarter-final and are in with a chance to win their group, much to the surprise of many people in and outside Denmark.

But not to the surprise of Frey.

“I understand that what we achieved is considered very big here in Denmark, but I am not surprised, considering the team we have. I think our team is very strong and very versatile,” she says.

"We soon found out we can match them all"

In fact, Frey is even a bit disappointed that her team has not achieved even more.

“Before the start of the Champions League we may have been a bit in doubt about where we stood, but we soon found out that we could match them all, and I actually think we could have had more points than we have,” she says.

“In our home game against CSM Bucuresti, in our away game against Metz and lately away against FTC, I felt there was more in it for us than we got.”

In the away match against Metz, Team Esbjerg were leading most of the team but had to settle for a draw in the end.

“A draw was actually a disappointment,” Frey says.

Coming to close to upsetting last season’s DELO WOMEN’S EHF FINAL4 participants on their home court in France a few weeks ago doesn’t mean anything for Sunday’s match.

“Even though we dominated the match in Metz, that game does not count anymore. On Sunday we start from 0:0 again, and the way I see it, Metz are still favourites in that game,” Frey says. “But we will obviously do our utmost to continue our success.”

Next Article Odense and THC chase comeback wins at home

Eckerle: “We are not travelling to Budapest as tourists”

FEATURE: Esbjerg’s German goalkeeper expects a “lifetime experience” at her first EHF FINAL4 — especially in the semi-final against Györ

Referees and delegates nominated for Budapest

NEWS: The EHF has announced its nominated officials for the EHF FINAL4 Women 2022 on 4/5 June

Nocandy: “Arriving in Budapest is entering a different world…

FEATURE: In her last least season with the club, the Metz captain is gearing up for her second visit to the EHF FINAL4

FEATURE: The Swedish centre back will leave Vipers, after trying to win the EHF FINAL4 for a second time

DRAW REVIEW: The semi-final pairings for the EHF FINAL4 on 18/19 June 2022 have been set during the draw in Vienna on Tuesday

This is me: Patrick Wiencek

FACTS AND FIGURES: The numbers and stats of the EHF Champions League 2021/22 season before the EHF FINAL4 draw on Tuesday

NEWS: The draw of the semi-final pairings for Cologne receives widespread media coverage on Tuesday

NEWS: The semi-final pairings for the EHF FINAL4 Men 2022 will be drawn at the EHF office in Vienna on Tuesday at 11:00 CEST