Serbia stick to what they know after EHF EURO success 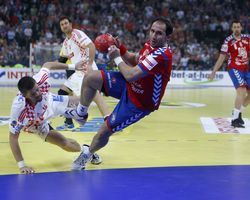 Serbia stick to what they know after EHF EURO success

Serbia’s men’s national team coach Veselin Vuković has announced a list of 28 players for the upcoming 2013 World Championship in Spain.

After the huge success of a silver medal at the Men’s EHF EURO 2012 last January and participation at the Olympic Games in London, Vuković has decided to make some changes for the beginning of the new Olympic cycle.

The goalkeeper position is reinforced with experienced Ivan Gajić from Slovenian RK Gorenje Velenje.  Playmaker Dalibor Čutura is the only one from the Serbian Olympic squad, who was not shortlisted for the World Championship, while two more “silver eagles” line player Rastko Stojković and right wing Miloš Kostadinović did not receive a call up.

Serbia will have four test matches against Romania in Balatonfuredi, Hungary (28 December), Hungary in Veszprem (30 December) and Niš (5 January), and finally against Egypt (6 January).

The “Eagles” are playing in Group C in Zaragoza with Saudi Arabia, Slovenia, Belarus, Poland, and Korea.