All participating teams in the upcoming season of the DELO EHF Champions League have learned their group phase rivals after the draw in Vienna conducted by the EHF President Michael Wiederer has divided them into two groups.

"It will be really exciting to start with handball again and to play the Champions League game. With the new playing system it will be different and will be very important to play good in every game to be able to finish on the top position and reach directly the quarter-finals," Györ goalkeeper Amandine Leynaud commented on the draw.

CSM Bucuresti, who were the last team other than Györ winning the most coveted trophy in club handball in 2016 will meet Metz Handball, Rostov-Don, Vipers Kristiansand, Team Esbjerg, FTC-Rail Cargo Hungaria, SG BBM Bietigheim and RK Krim Mercator in group A.

The first round will be played on 12-13 September and the group phase will conclude in the beginning of March next year. The group phase schedule will be confirmed at the later stage. 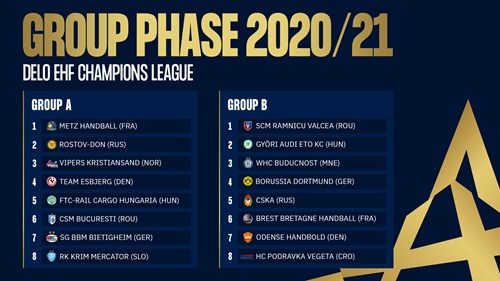 Europe’s premium competitions open their new chapter after the EHF has teamed up with Infront and DAZN for the next decade and the EHF Champions League will get a fresh look across several layers.

Already before the group phase draw the new attractive brand identity has been rolled out, the competition will be played in a new playing system with only two groups of eight teams and also the playing times have been fixed with weekends reserved for the DELO EHF Champions League. On every match day an appointment to view has been confirmed with all matches starting either at 16:00 and 18:00 on Saturdays or at 14:00 and 16:00 (CET/CEST).

The group phase will be followed by the play-offs and the quarter-finals, to find the four teams that will battle for the prestigious title in Budapest. On the fringes of the draw in Vienna also the brand new trophy for the winners of the DELO EHF FINAL4 2021 has been unveiled.