26 November 2016 was a special day for Israeli and European handball. On that date, Maccabi CASTRO Tel Aviv beat St. Petersburg HC 28:23 to overcome the Russian side on aggregate in the third qualification round of the EHF Cup after they had lost the first leg 25:23.

It was the first time that a handball club from Israel reached the group phase of the EHF Cup. For the Tel Aviv-based side and 2015/16 domestic champions, who only narrowly failed in qualification to the VELUX EHF Champions League, it was the biggest success in its history.

“Let's be realistic. We have already achieved a historic result and playing the group phase will be a pleasure for us,” says head coach Dragan Djukic who also trained Israel’s national team in the past.

“Our opponents, the names of the clubs, their tradition, the quality of their players and huge international experience make us the underdogs.

“There is no any imperative for victory ahead of us, but the big desire to enjoy these fantastic matches and give a chance to the Israeli handball fans to see teams such as Magdeburg, Kolding and Tatabanya.”

Maccabi will host their matches in the Shlomo Sixt Arena in Tel Aviv with a capacity of 2,800.

Furthermore, the club invests a lot in the development of its youth players. Djukic is one of three Serbian coaches the club signed to build a generation of players that is hoped to be as successful as the current one.

The club also runs a special social project in which Israeli Arab kids can train together with Jewish children.

“For me having reached the group phase means a lot because I'm proud of this generation of players who believed from the beginning that we can do it and worked hard to succeed,” says Djukic.

“St. Petersburg was a great rival and beating such a team means that we can do even more, but we are still grounded and will continue to move forward step by step.

“Playing in the group phase of the EHF Cup will be a great experience for my team and the possibility for progress on the team and the individual level.”

Due to the fact that in the past 20 years only three non-German clubs won the EHF Cup, Djukic expects another dominant season for Bundesliga participants, but he also has other teams on the list: “Besides my top favourites Füchse Berlin, French team Saint Raphael or the two Portuguese giants Porto and Benfica can make it.” 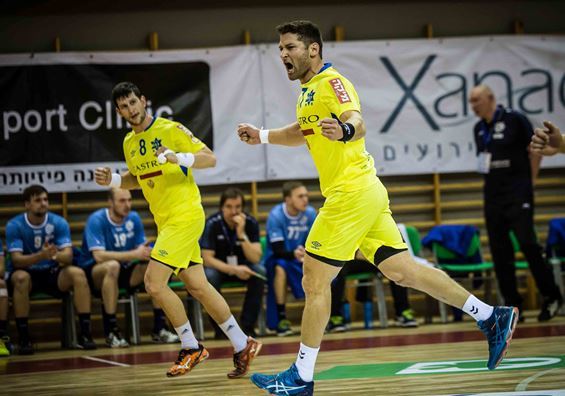 DRAW PREVIEW: The pairings for the next two rounds of the EHF European Cup Women 2021/22 will be determined on Tuesday

ROUND REVIEW: Rocasa and Elche joined fellow Spanish side Malaga in the last eight

ROUND PREVIEW: The last five tickets to the quarter-final will be booked when the Last 16 wraps up this weekend

Malaga and Vestmannaeyjar through to quarterfinals

ROUND REVIEW: Costa del Sol Malaga and IBV Vestmannaeyjar secured their progression from the Round of 16.

Last 16 opens with double-headers in Iceland and Spain

ROUND PREVIEW: Two quarter-finalists will be determined in the first weekend of Last 16 action in the European Cup Women

Former champions Skövde and Minsk to meet in Last 16

DRAW REVIEW: The eight pairings for the EHF European Cup Men Last 16 have been drawn on Tuesday

DRAW PREVIEW: Clubs from only nine countries remain in the race for the trophy and will learn their next opponents on Tuesday

Romanian sides bounce back at home

ROUND REVIEW: The line-up for the Last 16 of the EHF European Cup Men is complete following 16 matches played this weekend

Court of Handball imposes a one-match ban on Bera

OFFICIAL STATEMENT: The left wing of CS Minaur Baia Mare will miss the second leg of the EHF European Cup Round 3 against Partizan following…