Team Tvis Holstebro will go down in history as the team which won the last edition of the Women’s Cup Winners’ Cup before the tournament merges with the EHF Cup in the next season.

A week ago, the Danish side impressively came from behind to beat HC Lada Togliatti at home (31:27). And now, they won in Russia to celebrate their third European trophy for the last four years. 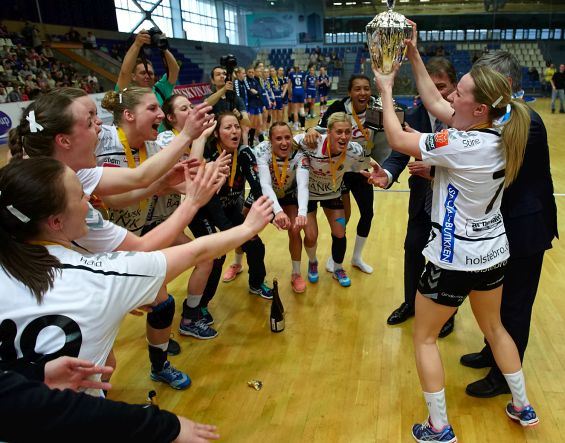 The Russian side had a reason to believe that their home court in Togliatti might be an important factor to help Lada winning the trophy. And in the first quarter of the game, their hopes seemed to be justified.

Supported by the local fans, the host team raced forward from the first seconds. Although Holstebro’s goalkeeper Silje Solberg made some great saves, Lada’s advantage was gradually growing. Exactly in the middle of the half, they were leading by four goals (9:5).

But the Danish side weathered the storm and then suddenly found an antidote against their opponents. Togliatti could not score for the next five and a half minutes, allowing Holstebro to take the lead 10:9.

Lada's head coach Levon Akopyan took a time-out but it did not help, and the guests were comfortably winning 13:11 at the half time.

Eight of the thirteen Holstebro’s goals were scored by Nathalie Hagman. The unstoppable Swedish left back added five more after the break and became the top scorer of the tournament with 75 goals.

Early in the second half, Lada managed to draw level for a couple of times, but never did more than that. And as the time went by, the Danish team’s advantage became more and more obvious.

So now, already in the Cup Winners' Cup, the team coached by Pether Krautmeyer broke the tradition and won the third title in the last four years.

Next Article Győr claim narrow victory in battle of defences

Quintus and Vestmannaeyjar face Greek opponents in round 2

NEWS: 27 ties were drawn in round 2 of the EHF European Cup Women 2022/23 at Tuesday's big draw event in Vienna

NEWS: Raimond Sassari and SSV Brixen will meet when round 1 of the EHF European Cup Men begins on 10/11 September 2022

118 balls to be opened at Tuesday's draw event

PREVIEW: A big draw event for the 2022/23 club season will take place on Tuesday 19 July at the EHF Office in Vienna

NEWS: The club registrations for the upcoming season of the EHF European Cup Men have been released

NEWS: Seeding for the new season in the third-tier competition revealed.