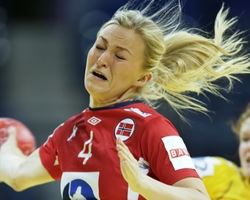 Issy-Paris Handball, the French club who will play in the quarter-final of the Women’s Cup Winners' Cup at the beginning of March, have announced the first signature for next season’s squad.

22–year-old Norwegian centre back, Stine Bredal Oftedal, has signed a two year contract with the club and was presented to fans last weekend during the final of the French League Cup, which Issy-Paris organised and won 23:21 against Nimes.
Stine Bredal Oftedal currently plays with Stabaek, the club that Issy-Paris beat in the Last 16 of the Women’s Cup Winners’ Cup.

Oftedal made a strong impression on her future fans, scoring nine goals in the return game in Paris.

But the Issy-Paris staff had been tracking this player long before then, with their Norwegian player Charlotte Mordal being a key role in this transfer.

"I train every summer with these girls in Stabaek, so I'm a little bit of a spy.

“I knew Stine is a great player, young but with a lot of potential. I'm sure she will be an important addition to our roster," Mordal admitted to Le Parisien.
At only 22 years old, Oftedal already has a lot of experience and has been in the Norway national team since 2010.

She took part in last year's EHF EURO in Serbia but didn't get much time on the court, since she is still learning, a fact she admitted on Issy-Paris’ website.

"I know that the French league is a very tough one, there is a lot of fight to get to the top positions.

“But Chalotte Mordal told me a lot of great things about it, and that the coach really wanted me in the squad, so it convinced me to come.

“I've had so much fun in Stabaek that it's hard to leave, but I'm really appealed to this new experience."

Issy-Paris Handball face Hungarian club Vaci NKSE in the quarter-final of the competition, with the first leg on Saturday, 9 March.

Next Article Much at stake in race for semi-final berths