While Telekom Veszprém had a straightforward afternoon against Aalborg to remain on top and could afford to rotate the bench ahead of next weekend’s Match of the Week in Paris, THW Kiel were made to sweat until the final buzzer in their away win at Brest.

· Mate Lekai is Veszprém’s top scorer once again despite injury
· First away win for Kiel in this season.
· Goalkeepers Pesic and Landin with world-class performances

18 saves from Niklas Landin and a match winning sixth and final goal from Nikola Bilyk gave Kiel the points after a true Match of the Week thriller.

THW kept their perfect record against the Belarusian champions in tact in their first away win of the season, which put both sides level on five points.

Goalkeeper Ivan Pesic was Brest’s hero in the first half as he prevented the guests from growing their 7:4 lead, before a Sergej Bebeshko timeout turned the tide.

Brest played with more will and precision to draw level, then snatch a 14:12 lead to take into the dressing rooms.

THW coach Alfred Gislasdon must have found the right words at the break and his team flew out of the blocks in the second half on a 4:0 run.

Kiel could not put the game to bed, however, and the hosts remained in the race, drawing level four times, but could not take the lead as Niklas Landin produced a masterclass in goal.

His saves added confidence to his teammates, who now were in a flow and went on a decisive 5:1 run.

Somehow Brest mustered one more comeback and with one minute left they were within a goal, but Nikola Bilyk decided the encounter and Kiel held on for the two points.

"The match was thrilling from start to finish. We had problems in the attack, I guess discipline was missing. We could have shared the points in the end, but nothing is lost, We keep moving," said Brest keeper Ivan Pesic.

The first duel between the sides was a one-sided matter. Veszprém looked comfortable, even without captain Laszlo Nagy, while Aalborg’s improved second half was never enough to add to their two points as they sit bottom of the group.

Thanks to their higher individual class, boosted by the fans and backed by the goals of Mate Lekai and Gasper Marguc, the hosts opened a healthy lead at the break.

The only shock for Veszprém after the break was Lekai’s ankle injury and Kent-Robin Tönnesen’s red card 10 minutes into the second half with the score at 21:16.

Aalborg then came within four goals, but these incidents did not stop the hosts on their way to their fifth victory of the campaign.

Lekai even managed to return on court after ten minutes of treatment and finally became the game’s top scorer with seven goals; Simon Hald netted six times for the visitors.

“I expected a faster game but the seven against six play of Aalborg made the match a bit slower, but we were able to adjust to it. So, all in all, I am very satisfied that we won and I can still see the progress in our team,” said Veszprém wing Gasper Marguc after the victory. 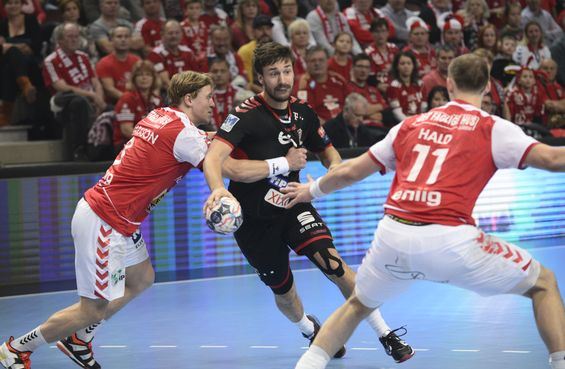 Previous Article Barcelona and Vardar make light work of round 6

Next Article Buducnost shake Group D up with win over Metz