Knudsen eyes another trip to Germany after Melsungen game

Knudsen eyes another trip to Germany after Melsungen game

Playing the last season of his illustrious career, Danish line player Michael V. Knudsen is expecting “a great experience” on Saturday when he returns to the country where he spent nine years.

Knudsen and his club, Bjerringbro-Silkeborg, will be guests in the 4,300-capacity Rothenbach-Halle in Kassel to take on MT Melsungen in the Men’s EHF Cup group phase (live on ehfTV.com at 20:45 CET).

“Having reached the age I have and playing my last season, I like to play at some of the great venues one last time. So, of course, I am looking forward to our away match against Melsungen,” the 41-year-old Knudsen says.

Germany is the country where Knudsen spent a large part of his playing career. He joined SG Flensburg-Handewitt from Viborg HK in 2005, and left the German club after winning the VELUX EHF Champions League in 2014.

Meanwhile in his sixth season with Bjerringbro-Silkeborg, a return to Germany remains something special.

And Knudsen hopes that Saturday’s match in Melsungen won’t be his last trip to Germany, as this season’s EHF Cup Finals will be staged in Berlin in May.

“We saw it as a fifty-fifty game”

The first meeting between Bjerringbro-Silkeborg and Melsungen ended with a 35:31 win for the Danish side last week, after the German visitors had been five goals up in the first half.

“Before the match, we saw it as a fifty-fifty game, so it was great that we were able to win,” Knudsen says. “We really got the momentum in the second half. Winning against one of the best teams in the Bundesliga is always a great achievement.”

Going into Saturday’s match, Bjerringbro-Silkeborg are second in Group A with four points, trailing unbeaten SL Benfica by two. Melsungen are third with two points.

“Melsungen are obviously under pressure, but they have two home games left,” Knudsen says. “They have lost some games lately, also in the Bundesliga, and I am actually surprised that they are not ranked better. I do think we have a chance there.” 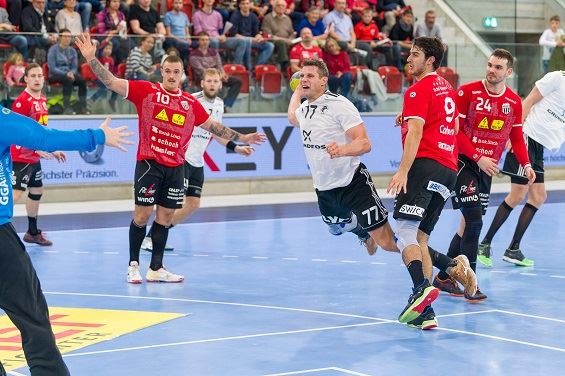 Knudsen announced his retirement a while ago.

“Actually, my body still feels okay, but I cannot run away from my age. The players I used to play with and against, have more or less all ended their careers,” says Knudsen, adding he is “looking forward to doing something else than playing handball.”

Reflecting on his long career, the Danish line player recalls many great moments.

“As a youngster, winning a cup tournament in the neighbour town was the greatest I could achieve. Later, winning the Champions League with Flensburg and the European Championship with Denmark obviously stand out,” he says.

“I hope people will remember me as a fighter, as someone who went forward on and off the court and as a decent guy in general.”

“We have been a bit instable”

Knudsen is eager to end his career with a high, and reaching the EHF Cup Finals with Bjerringbro-Silkeborg would be just that.

“Our chances to get that far are pretty good, although we may have been a bit unstable so far,” he says.

Bjerringbro-Silkeborg lost the group phase opener against Benfica by nine goals (33:24), which Knudsen calls “our worst game so far.”

However, the Danish side recovered with a 32:29 win over KPR Gwardia Opole in Poland before also winning against Melsungen last weekend.

“Our win away against Opole was probably expected but our win against Melsungen was really great,” says Knudsen, adding the his team might need eight points in order to be sure to reach the quarter-final.

“We will need to win at home against Opole and away against either Melsungen or Benfica. I do not consider that to be unrealistic,” he says.

For Knudsen, another trip to Germany after Saturday - to the EHF Cup Finals in Berlin - “would really be a great way for me to end my career.”