USAM Nimes Gard were leading by five goals in the first half and with four well into the second half against Liberbank Cuenca, but the Spanish visitors came back and were even closer to the win in the match which ended in a draw.

Rhein-Neckar Löwen were missing four to five key players in their away match against TTH Holstebro in the Men´s EHF Cup on Saturday night, but that proved to be no handicap to the German team who won comfortably.

A late comeback earned Cuenca the draw, and the Spanish away team were even closer to the win, leading by two goals with two minutes left, but Nimes managed to equalise after all.

Nimes had the far better start and took a 3:0 lead in double-quick time.

Their three-goal lead was increased to four goals at 6:2 and to five at 10:5, Nimes´ right wing Mohamed Sanad in particular causing the Cuenca defence problems.

Seven goals from eight attempts in the first 30 minutes alone for the Egyptian.

Cuenca managed to reduce the deficit to two goals at 10:8, but the home team stayed in the driving seat and were four up at half-time.

Nimes kept their four-goal lead at the start of the second half, but slowly, Cuenca caught up, and with 10 minutes left, they got their first lead at 26:25.

With two and half minutes left, the visitors even went two up at 29:27, before Nimes managed to equalise. 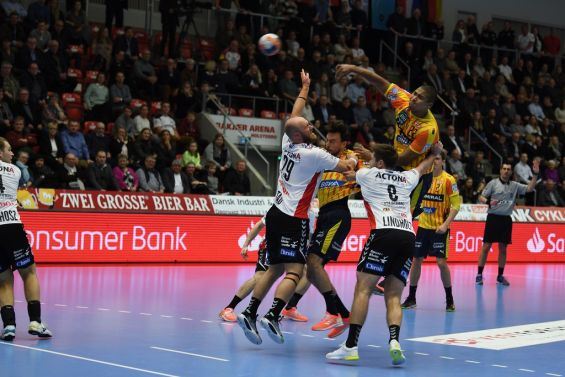 Rhein-Neckar Löwen were missing important players like Uwe Gensheimer, Romain Lagarde, Jesper Nielsen and Ilija Abutovic, but that did not stop them from taking a clear win in Denmark on Saturday evening.

The visitors began the match in control and being two to three goals up most of the time.

From being four goals up at half-time, Rhein-Neckar Löwen went on to several six-goal leads from the start of the second half, before increasing to 11, when their lead was as its highest.

Holstebro were in the final tournament of the competition last season, but having started their current group phase campaign with two defeats, the Danish team already face a huge challenge to proceed this season.

With four points, Rhein-Neckar Löwen seem to be heading for the quarter-finals.

Johan Meklenborg gave a frank assessment of where TTH went wrong, "We did not have the energy and ignition needed to match Rhein-Neckar Löwen today. We didn’t succeed with what we have prepared in relation to Andre Schmid and their line players. Rhein-Neckar Löwen scores in almost every attack and it makes it difficult to match a top team like them."

Next Article Champions CSM Bucuresti in quarter-final after thriller

GROUP B REVIEW – Former Germany international Oliver Roggisch got a win in his first match as Rhein-Neckar Löwen coach, but it took some tim…

GROUP B REVIEW: TTH Holstebro fought back from a four-goal deficit to take the lead, but in the end, USAM Nimes Gard earned their first EHF…

GROUP B REVIEW: European debutants USAM Nimes Gard were close to snatching the win from Rhein-Neckar Löwen who managed to ride the storm at…

GROUP B REVIEW: Liberbank Cuenca went from being six goals up to trailing by two, but ultimately defeated TTH Holstebro and started their EH…