Liščević: "We are stronger than anyone at home" 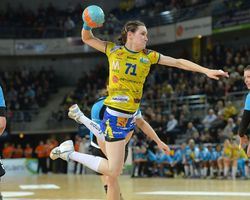 Liščević: "We are stronger than anyone at home"

Her form and quality are awarded with a new contract with the French club until 2014, who are still in the hunt for a “triple crown” in France and the EHF Cup.

“A new deal is signed with mutual satisfaction. I am happy in Metz with the way of living and of course with my team and individual progress.

“We have big plans for the future and I have enough time on the court which is the most important thing for the young player.

“Life is anything but boring in this city. We aren't just professional colleagues, but also good friends. That's why almost the whole team spend a lot of time together. That makes the team stronger and our results better and better – says Kiki for eurohandbal.com.

“I have to mention our fantastic fans. They make atmosphere in which I feel like I am domestic player. We have fantastic relationship and they helped us many times, when we were “down” to survive tough moments and win. Fans give us great dose of adrenaline.”

eurohandball.com: France became the perfect place for the Women's handball and transfer by transfer probably the best league in Europe?

Kristina Liščević: I spoke with the people about that. If you follow the championship, you can see that there are no unbeatable teams.

That is really good thing for the players, because you know that every match you have to take seriously. This season is really exhausting, but I know that next one will be even tougher as you know that Metz plays in four competitions. A lot of great handball names are coming from all sides of Europe.

eurohandball.com: Metz HB is still in the game for the “triple crown“ – domestic Championship, National Cup and EHF Cup?

Kristina Liščević: We finished regular part of the Championship at the first place. We played very well during the whole season, especially at home, where we didn't lose a match. Our sold out arena is one of the most important reasons for that success. We will play the cup final against Dijon on May 25 in Paris “Bercy“ and yes, we have a good chance to celebrate a “triple crown“ at the end of the season.

Kristina Liščević: Champions League is a dream of every player, no matter how old or young they are. There are no proper words to express what winning the competition would be like.

eurohandball.com: Before that, you have a chance to win a trophy in the EHF Cup against Danish side Team Holstebro on 5 and 12 May. What are your expectations?

Kristina Liščević: That would be the most important matches in the careers of the majority of my teammates. Most of the players don’t have that experience of the big final on their CV.

They will be matches full of emotions. Hopefully, my team won’t burn-out. I have a good feeling for both matches, even for the first one in Denmark.

We haven’t played well as guests throughout the season, but we want to change that. There is enough time to prepare for the next rival and to make tactics for every single player. The match in Denmark will be very important, because we are stronger than anyone at home.

ROUND REVIEW: impressive comebacks and post-match shootouts helped to determine all participants of round 2

ROUND PREVIEW: Round 1 of the EHF European Cup Men 2022/23 will be completed this weekend

Vestmannaeyjar, Zubri and Gracanica progress to round 2

ROUND REVIEW: Three teams secured their progression following wins in double-headers, while the Italian derby is still open after the first…

EHF European Cup Men to throw off on Friday

ROUND PREVIEW: Three round 2 participants will be confirmed following the double-headers in the opening round this weekend

DRAW REVIEW: Defending champions Nærbø IL discovered their possible round 2 opponents during Tuesday's draw at the EHF Office in Vienna

NEWS: The draw for round 2 of the EHF European Cup Men 2022/23 will take place at the EHF Office on Tuesday 6 September

Quintus and Vestmannaeyjar face Greek opponents in round 2

NEWS: 27 ties were drawn in round 2 of the EHF European Cup Women 2022/23 at Tuesday's big draw event in Vienna

NEWS: Raimond Sassari and SSV Brixen will meet when round 1 of the EHF European Cup Men begins on 10/11 September 2022

118 balls to be opened at Tuesday's draw event

PREVIEW: A big draw event for the 2022/23 club season will take place on Tuesday 19 July at the EHF Office in Vienna

NEWS: The club registrations for the upcoming season of the EHF European Cup Men have been released