Remarkably, no local derbies in this one, but plenty of cross-border rivalries, which are arguably more entertaining.

The first leg will take place on 14/15 November with the second leg to follow one week later.

So what we are certain of at this stage is that a Swiss and Kosovan club will qualify for round 3, two interesting derbies drawn so far this morning.

And that marks the end of the women's draw. The first leg matches of the second round will be played on 10/11 October and the second leg will follow one week later on 17/18 October.

First derby in the bag and it is an all-Swiss affair! 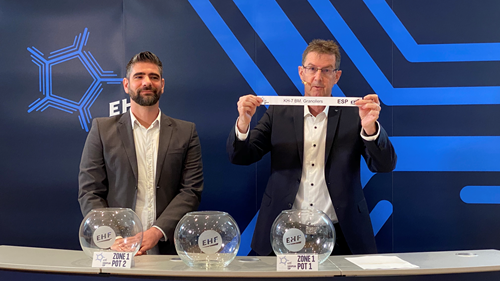 11:02
We are all set to go in Vienna. The drawing dream team for today sees Andrew Barringer make his debut as presenter, while seasoned pros Markus Glaser and Mario Kovacic will take care of the balls, beginning with the women's draw.

10:53
Last week, the EHF announced that the second round of the EHF European Cup Men has been rescheduled to 14/15 November with the second leg to follow one week later.

A total of 51 teams have been registered for the 2020/21 season. 19 winners of the second round will join 13 directly seeded teams in Round 3 in December. A complete overview of the seeding for the whole inaugural season of the EHF European Cup Men can be downloaded here.

10:41
In the European Cup Women, first leg matches of the second round will be played on 10/11 October and the second leg will follow one week later on 17/18 October.

A total of 41 teams have been registered for the 2020/21 season. Nine winners of the second round will join 23 directly seeded teams for Round 3 in November. A complete overview of the seeding for the whole inaugural season of the EHF European Cup Women can be downloaded here.

10:30
There is no country protection in this morning's draw, this coupled with regional zoning means we could be handed some derbies in the opening round. At this time, a short trip will be appreciated by all involved and although it may not be the most exotic result for players, it sure makes for a good narrative.

10:23
Among the Challenge Cup winners on the men's side, we have reigning champions CSM Bucuresti and 2012 winners Diomidis Argous.

Slovenia's Gorenje Velenje reached the EHF Cup Finals in 2015 and are no strangers to the EHF Champions League.

Cocks are one of the Challenge Cup's great success stories of recent years, having progressed from that level to the top flight, where they achieved some respectable results in the past two seasons.

They are back to compete in the European Cup and are one of three Finnish teams in Zone 1.

09:46
So this is how the women's draw pots look and we have some former Challenge Cup big hitters in the hat today.

09:40
The EHF has decided to adopt a new approach to the seeding of the teams. It was already used in July for the EHF European League qualification rounds draw and it received a very positive response from the clubs and players alike.

Instead of dividing the teams in just two pots like in previous years, this time zones based on reasonable geographical proximity have been created to prevent teams from travelling to the opposite side of the continent and also to reduce possible travel restrictions caused by the Covid-19 pandemic.

There will be two pots in each zone and the country protection rule will not be applied.

09:30
Welcome to another new chapter in European club handball. This morning we have the first draw event of the EHF European Cup for men and women, following its transformation from the Challenge Cup this summer.

The draw event will be hosted by the EHF headquarters in Vienna on Tuesday 1 September at 11:00 CEST and you can follow the fun right here.

Previous Article Brest ready to live up to the hype

11 round 2 tickets up for grabs

ROUND PREVIEW: 15 matches to be played from Friday to Sunday will finalise the list of EHF European Cup Men round 2 participants

Saratov, Granitas and Kaerjeng advance to round 2

ROUND REVIEW: Teams from Russia, Lithuania and Luxembourg booked tickets to the next round following wins in double-headers

EHF European Cup Men to throw off with 13 matches

ROUND PREVIEW: 20 teams from 18 countries will play their round 1 matches on Saturday and Sunday

Draw determines 42 pairings in rounds 1 and 2

DRAW REVIEW: The 50 teams starting in the opening qualification round in October have learned their opponents in Tuesday's draw

NEWS: Draw for rounds 1 and 2 will take place on 20 July; first matches in September

NEWS: 57 teams have registered for the EHF’s third-tier club handball competition; finals scheduled for May 2022