Main round starts without titleholders Slovenia

After four days full of exciting games and surprises in the preliminary round of the Men’s 20 EHF EURO 2022, hosted by Portugal in two different venues, eight teams are still in the race for title. Notable absentee in the main round are the previous winners of the event, 2018 champions Slovenia

Four teams – Portugal, Denmark, Sweden, and Serbia – have advanced to the M20 EHF EURO 2022 main round with the maximum amount of points, as two crunch games expect the eight qualified sides in the next phase of the competition.

Spain, France, Hungary, and Germany are the four other teams in the main round. 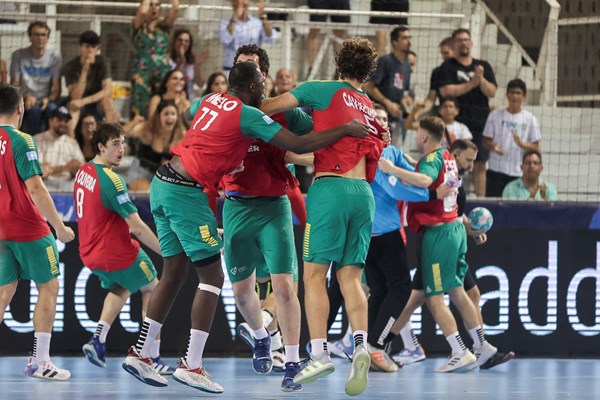 With 24 games played at the M20 EHF EURO 2022 in Portugal, things are looking good for the hosts, who have been the surprise package of the competition with a three-game winning streak, exactly like they managed four years ago, in Slovenia.

Led by a potential superstar in the making, Francisco Mota da Costa, and his brother Martin, who combined have scored 56 of Portugal’s 112 goals in the preliminary round.

Their last-gasp win against Spain (36:35) on Sunday night, with Francisco Mota da Costa scoring the last goal with five seconds to go, could prove crucial in Portugal achieving their objective on home court, as they start the main round with two points, facing Denmark and Hungary next.

Sweden were also one of the pleasant surprises, as were Denmark, who bounced back admirably after a tough last-gasp loss against the Faroe Islands. However, teams like Slovenia, Croatia, or Iceland, who had good results in the past editions, are now heading to the intermediate round, trying to salvage something from this tournament, eyeing one of the top 12 places, which will send them to the 2023 IHF Men’s Junior World Championship.

Five of the eight teams that made the main round in 2018 made the cut this time around, as the clashes scheduled for Tuesday and Wednesday will deliver the four teams for the semi-finals on Friday 15 July.

FINAL PREVIEW: Portugal and Spain will collide in the final at the M20 EHF EURO 2022, with the hosts aiming to create history

MAIN ROUND REVIEW: Portugal and Serbia are the other teams in the Men’s 20 EHF EURO 2022 semi-finals

Hungary and Germany finish with wins at M20 EHF EURO 2022

PLACEMENT MATCHES REVIEW: Hungary and Germany ended M20 EHF EURO 2022 on a high as they beat France and Denmark on Sunday

The story of Spain's epic comeback

FEATURE: Spain delivered a superb comeback in the M20 EHF EURO 2022 final against Portugal, but what is the story behind it?

BRONZE MEDAL MATCH REVIEW: With a strong start that restricted Sweden in attack, Serbia sealed the bronze medal at the M20 EHF EURO 2022