The 47 matches played in this year’s championship reached a cumulative television audience of over one billion people enjoying an astonishing 1,700 hours of Europe’s best handball action. This magic figure means an increase of 50 percent in the last two years of competition and sets a new record in terms of event coverage on television. Together with the astonishing audience figures from the previous event (1.2 billion in 2008), both broadcasters and viewers have enjoyed an amazing two prong television marketing success story.

The results are based on an independent programme analysis, including information provided by broadcast partners worldwide. The report compiled by the German communication research agency Sport+Markt on behalf of Infront - the exclusive commercial partner to the EHF since 1993 - is seen as a conservative estimate for the event's total coverage as some markets were unable to provide audited audience data to meet the full criteria of the study. 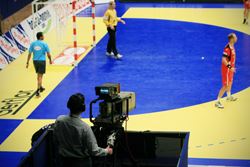 The excellent results are based on the successful global distribution of the media rights for the EHF EURO by Infront and the positive status of the sport of handball on the market.The international sports marketing group based in Switzerland concluded broadcast agreements with 70 territories in Europe, the Middle East, Asia and South America. The event was transmitted by 80 television and radio stations with a total 599 representatives present on-site in Austria, an increase of close to 200 compared to the 2008 event.

The overall picture is positive

Tor Lian, President of the European Handball Federation, said: “The EHF is delighted with the persistently high level of television figures achieved. It is proof of our consistent media distribution policy and that the EHF continues to work intensively with all its partners to further strengthen the EHF EURO Events.”

Stephan Herth, Executive Director Summer Sports, Infront comments: “The worldwide broadcast distribution for the EHF EURO 2010 has demonstrated the power of the Infront and EHF partnership and is on an equal footing with the 2008 championships performance. The increase in coverage provides a taste of what to expect from the partnership in 2012 and into the future. It also sends a very positive message to the sponsorship market.”

Previous Article Convenient to be favourites