On 4 March, the Skjern Håndbold goalkeeper saved no less than seven penalties in a row within the same half. It was a decisive factor in Skjern’s 33:26 win over Motor Zaporozhye, which wiped out the two-goal deficit from the first leg in Ukraine.

The reward is a Last 16 clash with Veszprém, with the first leg taking place in Denmark on Sunday at 15:50 hrs (live on ehfTV.com).

No special strategy or recipe

“I am speechless!” Ivanisevic said after the match against Zaporozhye.

The Ukranian side were awarded eight penalty shots in total in the second half. After Ivanisevic had saved the first seven, the eighth attempt ended at the crossbar.

Since then, Ivanisevic has proven that his achievement in the Champions League was no coincidence. In the following Danish league matches against Nordsjælland Håndbold and KIF Kolding Kobenhavn, he has saved more than half of the opponents’ penalty shots.

“I don’t have some special strategy or recipe for saving penalties,” the keeper tells ehfCL.com. “It is a mental duel and it is about the entire atmosphere in the arena.”

Also, it matters which player is taking the shot.

“It has something to do with the way you feel about the various shooters,” Ivanisevic says. “After I had saved five penalties against Zaporozhye, their next shooter was their left wing who had never taken a penalty before so I began to relax.”

Success from the start

The 27-year-old Serbian goalkeeper joined Skjern at the start of the calendar year 2017, coming from the 10th-ranked side in the Hungarian league, Gyöngyösi KK.

Before moving to Denmark, Ivanisevic had only competed in Champions League Qualification - with Bosnian side RK Borac m:tel - and played two matches for the Serbian national team.

However, his stint in Denmark was success from the start.

His performances in Denmark also earned him a comeback in the Serbian national team, and he made the squad for the EHF EURO 2018 in Croatia in January. 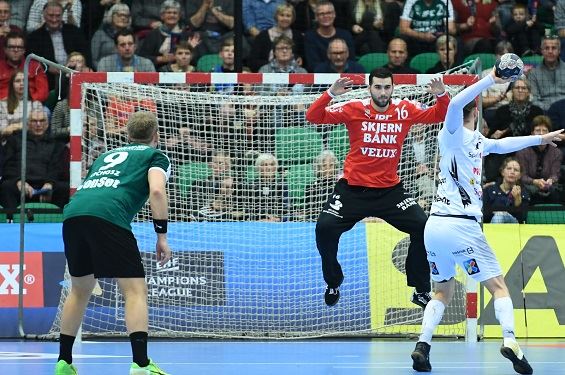 His many strong performances have also been noticed elsewhere. German Bundesliga club HSG Wetzlar have bought him out of his contract with Skjern a year before it was due to expire.

“I am leaving Skjern with mixed feelings,” Ivanisevic says. “Playing in the Bundesliga has always been an ambition for me, and it is really a dream coming true. On the other hand, the past 15 months here in Skjern have been the best time in my entire career.”

Leaving “a lot of good friends” behind when moving to Wetzlar, Ivanisevic is eager to end his stint in Denmark on a high note: by winning the national championship and qualifying for the Champions League again.

“We can only surprise against Veszprém”

And, of course, by continuing Skjern’s adventure in the current European season. Having reached the Last 16 for the first time in 14 years, Veszprém are their opponents over the next two weekends.

“Those matches will be particularly special to me as I used to play against Veszprém when I was playing in Hungary,” says Ivanisevic, who praises the Veszprém fans for creating “a fantastic atmosphere.”

The goalkeeper is reluctant to speculate about Skjern’s chances against the Hungarian outfit, which have made it all the way to Cologne for the VELUX EHF FINAL4 in each of the past four seasons.

“We are obviously the underdogs and we can only surprise, so we have nothing to lose and feel no pressure ahead of those two games,” he says. “We just aim to play as well as we can and then we will see what that brings.”

Next Article Trondheim the place for biggest EHF EURO draw

MOTW REVIEW: In their first DELO EHF Champions League game since October, Vipers wasted a four-goal lead in the second half to draw against…