“Reaching the quarter-finals would mean so much”

“Reaching the quarter-finals would mean so much”

In the Norwegian league, Storhamar Handball Elite have been used to standing in the shadow of Larvik HK and lately Vipers Kristiansand.

In the Women’s EHF Cup, however, Storhamar have had tremendous success so far, and should they beat SG BBM Bietigheim at home on Sunday afternoon, they will guarantee a quarter-final spot even before the last match day.

“Reaching the quarter-finals would mean so much to us,” says left back Betina Riegelhuth who may be best known as the younger sister of Larvik player and former Norwegian international Linn-Kristin Riegelhuth Koren, but she too has experienced national team action.

With 22 goals in the first four group matches alone, she has played a big part in Storhamar’s current advantageous position.

“So far, our European Cup adventure has been really great and reaching the quarter-final would be huge,” says Riegelhuth, who hopes home advantage will be decisive on Sunday.

“We are playing at home and we will have to use this as an advantage.

“Our first match against Bietigheim turned into a close affair (28:25 for Bietigheim) and I expect much of the same this time.

“We feel we have chances in this match, but we are also prepared for a tough game, where we will have to perform at our best.”

“We got a tough draw in the qualifiers, but we took our good performances against Hungarian ÉRD HC with us to the group phase.

“We achieved good results with a draw against Esbjerg and a narrow away defeat against Bietigheim, who came from the Champions League.

“At the same time, we feel that there is even more in us and that we can get more out of our potential,” says the 31-year-old backcourt player, who played outside Norway for one season of her career.

In the 2015/16 season, she represented Danish side Team Esbjerg, with whom she got to play in the Women´s EHF Champions League as well as winning the Danish championship before returning to Storhamar.

This season, Team Esbjerg are among Storhamar’s opponents in the group phase.

“It was very special to be drawn against Esbjerg in the group phase, but at the same time, the team has changed a lot since I was there.

“I had some very good experiences in Esbjerg, and I have really good memories of the club and the city, and to me, meeting them again has been a good experience.

“I am looking forward to going to Esbjerg and Dokken (Team Esbjerg’s home venue) for our last group match and to meet the people in and around the club. They are fantastic,” says Riegelhuth. 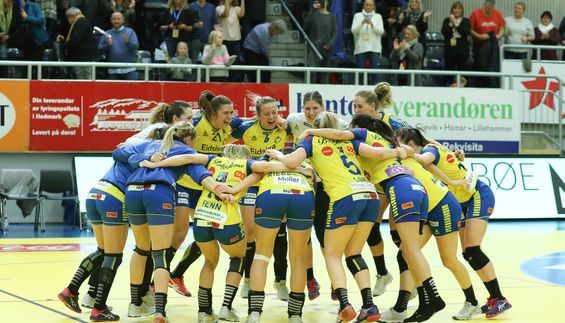 Dreaming of the top flight

She sees a huge potential in the current Storhamar team.

“I believe in our team, and I think we can get far in the EHF Cup already this season, but to achieve that, we will have to start by winning on Sunday,” says the left back, who hopes to also play the Champions League with Storhamar in a not too distant future.

“The club and the team have a wish to qualify for the Champions League and we are still on the way to achieving that already this season, so there will be an opportunity to qualify very soon.

“It is a dream for our team and I hope it will happen someday.”

Right now, however, she is focusing on the crucial match against Bietigheim, which will be broadcast live on Sunday at 15:00 CET on ehfTV.com.

Next Article Tatabánya ready to take the next step