Dinamo Bucuresti were delighted with their major breakthrough last season, progressing through the group C/D play-offs to reach the EHF Champions League Last 16.

However, their opportunity to take on Europe’s heavyweights was cruelly taken away by the COVID-19 pandemic and now they must prepare for a new challenge as they enter the new-look EHF European League in the group phase.

The burning question: Will the ‘Red dogs’ become big dogs at this level?

Over the past couple of years, Dinamo built a reputation for themselves as a side well capable of breaking into Europe’s elite, thanks to their dominance at home as well as their well-rounded and somewhat exotic squad, featuring players from Africa, Asia and South America.

The core of that squad has remained intact and was bolstered over the summer with some proven quality and exciting potential, all of which points towards a big year for the club.

Dinamo will not be considered underdogs at this level and their direct placement into the group phase means they will be well prepared when the time comes to tackle this bigger and better second tier. If the club wishes to make a case for inclusion in the top flight next season, they will have to let their handball do the talking and reach the knockout rounds.

Since his arrival in 2018, Tunisian right back Amine Bannour has become a hero for the Dinamo faithful, thanks in no small part to his 111 goals over the past two EHF Champions League campaigns.

If the 30-year-old can avoid the injury issues which have affected him, he will be a nightmare to deal with for any club in the European League. With his power, shooting arm and a wealth of international experience, Bannour is a man you cannot sleep on this season. 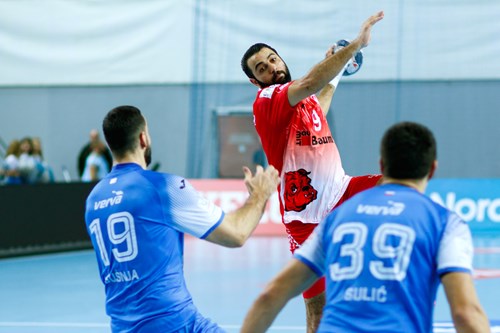 The club’s 34-year-old captain took on a different role towards the end of last season as he was deployed as a police officer during the early days of the pandemic in Romania, a role which undoubtedly suited the defensive enforcer down to the ground.

Savenco plays a crucial role in Dinamo’s defence and has become a crowd favourite over the course of his seven years with the club.

He is no spring chicken but that does not make the arrival of Valentin Ghionea any less exciting for the club.

The 36-year-old right wing has been one of Romania’s top talents over the past two decades and he has finally returned to his home country after spells with Plock and Sporting, regularly competing in Europe’s top flight.

Ghionea enjoyed two years with the club way back from 2005 to 2007 and, should he hit the ground running, will strike up a delightfully frightful partnership with Bannour on the right side of the attack.

A night to remember

To find Dinamo’s greatest moment in European handball, we must go back to the European Champions Cup in the pre-EHF days.

They were consistent contenders in the early days of the competition, twice reaching the semi-finals and the final once in the first five editions.

It is no surprise that the club were European heavyweights, as coach Oprea Vlase and a number of the players helped the Romania national team to two World Championship golds in the early 1960s.

In the 1964/65 season, Dinamo tore through the competition, beating Vorwärts Berlin, Redbergslids and Grasshoppers Zürich en route to facing Yugoslavian champions Medveščak Zagreb in the final.

The final, played in Lyon, France on 4 April, was by no means a free-flowing classic. In fact, with 24 goals scored in total, it remains the lowest scoring final in the competition, alongside the 1962 and 1968 finals.

But most importantly, Dinamo Bucuresti came out on the right side of the low-scoring affair, winning 13:11 and claiming their first and only European title.