In his opening words of the tournament, EHF President Jean Brihault wrote in his magazine foreword:

“We look forward to welcoming the participating teams to the 2015 Men’s and Women’s European Beach Handball Championships, the competition will be played out in a dedicated event area. The tournament follows directly after the younger age category tournament.

“As it is not only the golden Championship plate up for grabs, but also a ticket to the 2016 Beach Handball World Championships it is expected that as the matches progress, the excitement for the fans will reach fever pitch as they root for their teams.

“For all the participants and guests staying in Lloret de Mar for this handball extravaganza, they can look forward to unrivalled hospitality at this six-day event. So all that remains to be said is welcome to Spain and beach handball at its best!” 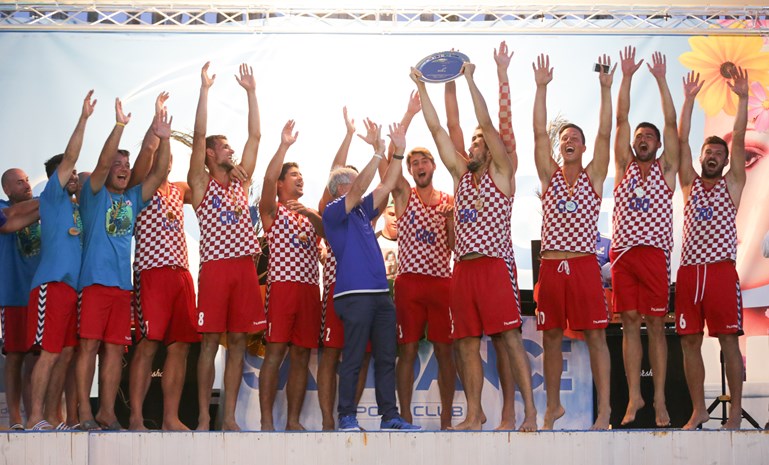 They tried but they failed. No team could stop Croatia from winning their fourth successive EHF Beach Handball EURO gold, despite the best efforts of Spain in the final. The host nation, playing in their first final since winning the competition in 2006, took the game to a shootout but it would be Croatia’s day once more in what was their fifth straight appearance in the final.

The bronze medal went to Ukraine, who also needed a shootout to claim the medal, beating Hungary. It was the fourth time the Ukrainian team had contested the bronze medal game. Russia, who had finished runners-up in the three previous events to Croatia, finished fifth. 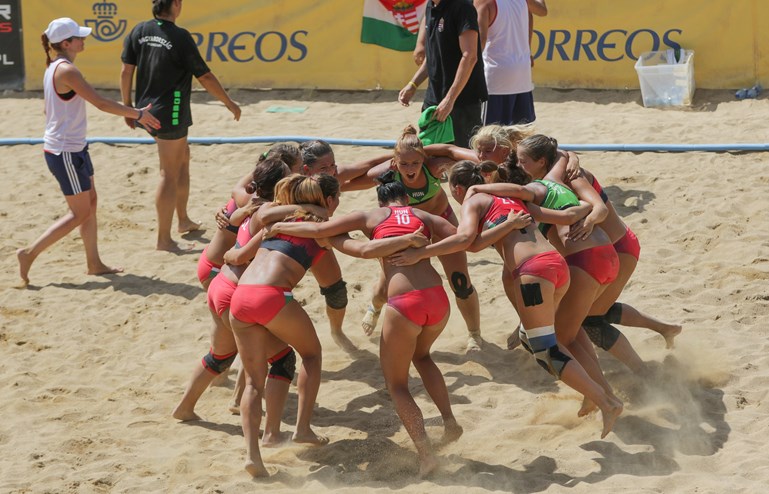 There was also plenty of drama in the women’s final as Hungary followed up their 2013 victory with another gold. This time the Hungarians saw off the challenge of Norway in the final, winning in a shootout. It was the fifth final in a row that was decided by a shootout.

In the bronze medal match, 2009 winners Italy took third place, beating a Spain team who had reached the semi-finals of the competition for the first time in the history of the women’s event. The game was also settled by a shootout.

Three minutes and 19 seconds of all of the best bits, including some words from Roman Kalashnikov, from the tournament are contained in this video for your viewing pleasure.

The best of the best

The All-star Team saw six players and two federations awarded for their efforts and fair play. For the second event running, Hungary’s Kitti Groz was named women’s MVP while Croatian keeper Igor Totic scooped the Best Goalkeeper award just like he did in 2013.

It was the fairest EURO to date. For the first time in the competition’s history, there was not one single direct red card shown in 127 matches.

“All the players and their coaches playing beach handball on a tremendous level and which is really impressive following the Fair Play spirit - the EHF Disciplinary Commission had an easy job because no red card with report was awarded in – and please note this figure – in 127 matches,” said former EHF Treasurer Ralf Dejaco in his closing speech.

Wiederer: EHF will do its utmost to influence beach handball…

OFFICIAL STATEMENT: The disciplinary body of the Beach Handball EURO 2021 sanctioned a breach of the Athlete Uniform Regulations

MEN’S FINAL REVIEW: The reigning champions put in a dominating performance to win gold again at the Beach Handball EURO

Meet the finalists: Will Denmark or Croatia grab gold?

MEN’S FINAL PREVIEW: The reigning champions meet the record champions in the men’s final of the Beach Handball EURO 2021

Meet the finalists: How do Denmark stack up against Germany?…

WOMEN’S FINAL PREVIEW: The defending champions meet the 2006 winners in the women’s final of the Beach Handball EURO 2021

SUMMARY: Coverage of the sixth and final day of the Beach Handball EURO 2021 in Varna

DAY REVIEW: The defending champions in the men’s and women’s event are back in both finals of the Beach Handball EURO

Beach EURO Live: Title holders Denmark back in both finals

LIVE BLOG: Running coverage of day 5 of the Beach Handball EURO 2021, featuring the quarter- and semi-finals for men and women