Kastamonu and Most had been unable to claim any points in the two previous rounds of the Women's EHF Cup group phase, so both sides were determined to finally get a positive result. Playing at home, the Turkish team did a better job than their rivals and won 33:27.

Also, there was a match for top spot in group A as both DVSC and Thüringer HC had won both their previous matches. The German side were dominant throughout almost the entire match and claimed a 26:19 win, taking another step towards the quarter-final.

In their previous matches against DVSC Schaeffler and Thuringer HC, Kastamonu had fought hard but ultimately lost both times. Now they finally celebrated their first win in the group phase, and did it deservedly.

However, Most should also be credited for their fighting spirit. The Czech team notably scored 10 goals from penalty shots, and Adela Striskova finished the match with nine goals, scoring from both from penalty shots and open play.

Kastamonu’s goals were more evenly distributed across the team; Yeliz Ozel, Asli Iskit, Yana Uskova and the captain Serpil Iskenderoglu all made some impact in attack, and the team performance helped the hosts to win.

For more than a half, Kastamonu had just a small advantage and were unable to pull clear, but between the 37th and 44th minutes, the Turkish side had a 5:0 run to increase their lead from 19:18 to 24:18.

Striskova’s five goals in the next seven minutes saw Most reducing the gap to 28:26, yet Kastamonu were the better side in the last 10 minutes, and they ultimately won by six goals. 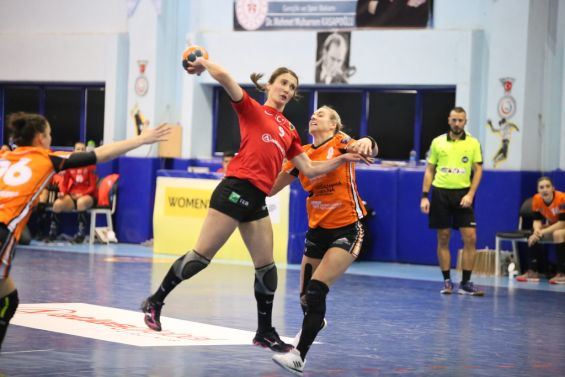 Thüringer HC had to play without their top scorer Iveta Koresova, who did not make the trip to Hungary because of health problems. A few other players were sidelined as well, but it did not stop the German side from celebrating their third consecutive victory.

While Beate Scheffknecht and Meike Schmelzer did their best in attack, the goalkeeping brilliance was another important factor of THC’s success; Ann-Cathrin Giegerich stood like a wall, and her multiple saves in the first half helped the visitors to lead by five goals (12:7) at half-time.

DVSC’s goalkeeper Agnes Triffa also played an excellent game, yet her heroics were not enough for the Hungarian side.

Debrecen kept up with the rivals early on in the match until the score reached 4:4, then they struggled to find their way in attack after that.

In the second half, Debrecen could not score between the 40th and 48th minutes, which allowed Thuringer to extend the gap to 21:13, and all questions about the outcome were virtually removed.

Despite his side's apparent solidity, Thüringer HC coach Herbert Muller did not believe it had been an easy ride.

"In the first half our defence was great and we gained a five-goal lead," Müller said. "I knew that DVSC would be better in the second half, so I was afraid of them. Fortunately, we were able to keep our lead. This win was important for us."

Previous Article The road to Egypt continues in April

Next Article Fair draw between Siófok and Podravka