Two weeks after Györ became the first team to win the Women’s Champions League twice in a row under the FINAL4 format, Vardar are hoping to repeat that feat at the VELUX EHF FINAL4 in Cologne.

On their mission to raise the trophy again, the Macedonian must earn their place in the final by beating Montpellier, who claimed the title back in 2003.

The Russian wing is currently best scorer of the defending champions and he will face another outstanding left wing in Vardar’s first match: Montpellier’s French international Michael Guigou.

Both semi-finalists ended the dreams of German opponents in the quarter-finals - but in contrasting ways. Vardar clinched their second straight VELUX EHF FINAL4 berth thanks to the away-goal rule after a 29:28 away win in Kiel and a 28:27 home defeat against the three-time champions. But Montpellier demolished 2014 champions Flensburg by a 12-goal win (29:17) in the second leg after a draw in Germany.

Montpellier are the first ever team to make it all the way to Cologne after starting the season in the Groups C/D. They defeated Leon in the play-offs and eliminated record champions Barcelona in the Last 16 before routing Flensburg. Vardar had the easier way to the quarter-final as they skipped the Last 16 as winners of Group A.

Vardar have completed the first part of their mission

Since Kiel’s participation in 2013, no defending champions qualified for the pinnacle event the following season, let alone won the title again. Vardar have completed the first part of that mission, and obviously want the take the next step as well.

If they succeed, their Croatian right wing, Ivan Cupic, becomes the first player since the golden Barcelona generation in the 1990s to win the Champions League trophy three times in a row, after he won it with Kielce in 2016 and with Vardar last year.

On the other side, Montpellier’s young gun Melvyn Richardson can follow his father, Jackson, who won the Champions League in 2001 with Portland San Antonio. And Portland were also Montpellier’s final opponent on that magic night in May 2003, when the French side made up a 27:19 defeat from the first leg with a thumping 31:19 victory, still the biggest winning margin in any Men’s EHF Champions League Final. 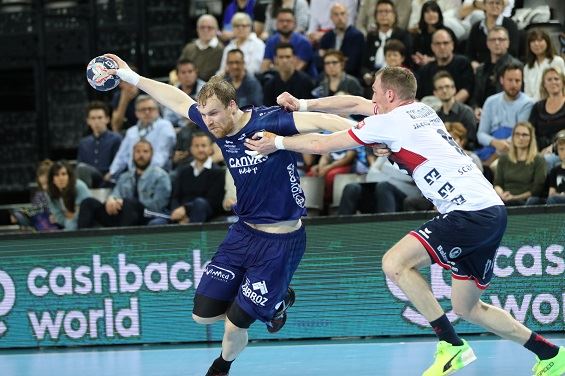 Statistics give Vardar the edge: they met Montpellier in the group phase of the 2014/15 and 2015/16 seasons and won three of those four matches, with the remaining match ending in a draw.

“We will be the underdogs in Cologne, but that doesn’t mean we will not have any ambitions. If you go to a FINAL4, it is to win it. It will be tough, but I am sure all four teams will have equal chances,” Montpellier coach Patrice Canayer says.

For him, qualification for the VELUX EHF FINAL4 2018 is a personal reward for his 24th season at the same club, the longest period in European club handball. Canayer steered MHB to the triumph in 2003, which is still the only trophy won by a male French team in any European Cup competition. In 2014, Canayer and Montpellier lost the EHF Cup Final in Berlin against Pick Szeged.

If Montpellier advance, the VELUX EHF FINAL4 will get its third final between two teams from the same nation since its inauguration in 2010. It also happened in 2011 (Barcelona vs Ciudad Real) and 2014 (Flensburg vs Kiel).

"There are no favourites in the final tournament"

If Vardar advance, they know they will face another French team as PSG and Nantes contest the other semi-final. Coach Raul Gonzalez will be full of motivation, as he will take over from Noka Serdarusic at PSG next season.

“Vardar are champions and we need to defend the title in Cologne,” he says. “We have to focus only on the things that will happen on the court. But there are no favourite teams in the final tournament.”

Gonzalaz likes to repeat the achievement by fellow Spanish coach Ambros Martin, who helped Györ win the women’s title two weeks ago before moving to a new club - in Martin’s case Rostov-Don.

Not only Gonzalez, but several players will leave Vardar, like Arpad Sterbik (Veszprém), Luka Cindric (Kielce), and  Joan Canellas (Szeged), putting even more pressure on the team to do well in Cologne now as they might not get another chance next year.