Waade: “We have nothing to lose in Budapest”

Waade: “We have nothing to lose in Budapest”

“I will probably have to say that we are underdogs in our semi-final against Györ.”

Vipers Kristiansand’s Silje Waade has a realistic and relaxed approach to her and her team’s debut at the DELO WOMEN’S EHF FINAL4. The Norwegian side will meet defending champions Györi Audi ETO KC in the first semi-final on Saturday (live on ehfTV.com from 15:15 CET).

“We have nothing to lose in a match like that and I hope we will be able to just play our own game,” says the 25-year-old right back, who admits that the chance to play the Women’s EHF Champions League was a main reason to join Vipers from league rivals Byasen before this season.

“Playing the Champions League was something I had not tried before, and it felt like a natural next step in my career. After eight years in the Byasen shirt, I was so ready to try something new,” says Waade. “I found the offer from Vipers was very attractive, and I also found they had an exciting and promising team.”

A very high level at training

The 29-time Norwegian international sees several reasons for Vipers’ success this season, which has taken them to their first EHF FINAL4.

“We have a very high level at training, where everyone is being challenged at every session, and we have numerous players who hold a very high level. We have a good mix of experienced and younger players, and this gives a good harmony in the group,” she says.

For Waade, partnering with Linn Sulland on the right back position has helped her development as a player.

“Linn has some extreme skills in her attacking play, from which I have learned a lot,” she says. “Another factor is that we have a very dedicated group of players who work hard at training every day, and who are eager to develop. Moreover, we have been able to keep our squad nearly free of injury. This has enabled us to rotate our team.” 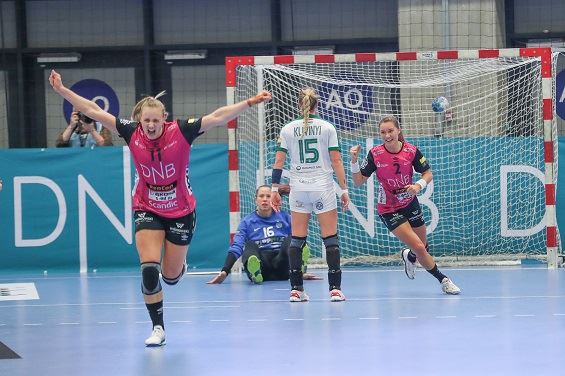 “He has been good at making us believe in the chance to reach the EHF FINAL4 and to teach us what it takes to get that far, thanks to his experience from being part of all this before,” Waade says. “I also think that we have taken some steps in terms of being better at holding on to our top level for longer periods of time, than we were back in autumn.”

"Going for the win"

As a young girl, Waade was practicing athletics, and it was not exactly in the cards that handball was going to be her career.

“I was practicing athletics until I was 15 years old,” she recalls. “Then, I had to choose between athletics and handball. I think my past as an athlete has given me good motoric skills, basic strength and a good condition to develop physically and to develop new handball skills.”

There is no doubt that she will need those skills at the DELO WOMEN’S EHF FINAL4 in the Papp Laszlo Arena of Budapest this weekend, an event she is very much looking forward to.

“Playing the (EHF) FINAL4 means a lot to me personally. It also proves that Vipers are keeping a high level, and we do things right in the way we work at training,” she says. “Beyond any doubt, the (EHF) FINAL4 is the greatest you can achieve in club handball.”

The semi-final against Györ will be third time in a few months’ time that both teams meet, after the Hungarian champions won both matches in the main round: 33:29 in Hungary and 33:26 in Norway.

“I realise that we are underdogs in the semi-final against Györ, but I actually think that our team feels well in the role as underdogs,” Waade says. “I believe that we should approach that semi-final in the same way as we approach any other match: going for the win!”