Wrapping up week one of the EHF EURO qualifiers

The journey towards the EHF EURO 2022 has well and truly begun, with 22 teams in action as the qualifiers got underway last week.

We know it is almost impossible to keep up with exactly what happened in all 18 matches, so here are some of the biggest takeaways from the first week on the road to Hungary and Slovakia.

14 teams were able to play a full qualifier week with two matches and five of them got their campaign off to a perfect start with the maximum four points.

Alfred Gislason was left scratching his head in Germany’s opening game as they fell behind 13:9 against an 11-man Bosnia and Herzegovina, before finding the solutions at half-time and claiming the two points. A second-half salvo was also needed in the 35:23 win over Estonia.

2020 surprise package Portugal are keen to show they are no one-hit wonder and recorded two convincing victories over Israel and Lithuania in group 4, though they were pushed hard at home against Israel for most of their 31:22 win.

Sweden were made to sweat in the second half against Romania but had no such worries against Kosovo in group 8, while Denmark and North Macedonia rule the roost with two wins each in group 7. 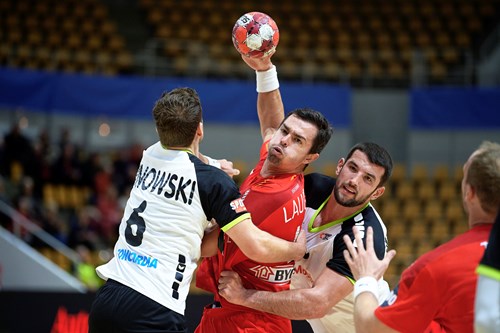 EHF EURO qualifiers always throw up a few surprise results and nervy battles and this week was no exception.

The Netherlands needed a buzzer-beating free throw from Kay Smits to spare their blushes against Turkey in the first game on Wednesday.

Turkey were inspired as they raced to a 5:0 lead and remained 14:10 up at the break. The Dutch were far more composed in the second half and looked to have sealed the points, until a late Turkish comeback meant top scorer Smits needed one more moment of magic to score his ninth goal and secure a 27:26 win.

Austria are not immune from the odd slip up at this level, and their young squad looked to be in a bit of bother with the scores level at half-time against Estonia. However, the Estonian team, missing a couple of big names, could not keep it going for 60 minutes and eventually fell 31:28.

Ukraine and Russia engaged in a double header this week, with both games in Belarus, and they served up two thrilling affairs.

Artem Kozakevych saved a point for Ukraine with two late goals in a 27:27 draw on Wednesday, but Russia would not be denied on Saturday, winning 30:28 – led by former Motor Zaporozhye player Igor Soroka with eight goals.

Romania ready to break through?

1996 was the last time Romania competed at a Men’s EHF EURO, but that could all be set to change.

An impressive second-half comeback against Sweden on Wednesday, which fell just short, provided plenty of hope for the squad – but none of that would matter if they could not deliver in their key game at home against Montenegro on Sunday.

Montenegro know their way around a qualification campaign and got off to a much better start with a 5:1 lead. The hosts soon woke up, however, with the likes of Gabriel Bujor, Radu Ghita and Andrei Nicușor Negru racking up the goals.

A 16:13 half-time lead soon turned into a rout as Romania were determined not to let this chance slip. The 36:27 victory puts them into second place in group 8 and the dream of reaching an EHF EURO final tournament for the first time in 26 years lives on.

King Kiril shows no signs of slowing down

At the age of 40, Kiril Lazarov is still delivering the goods for his nation. The Macedonian right back buried 17 goals in two matches this week, leading them to victory over Finland and Switzerland and taking a big step towards reaching the EHF EURO 2022.

Lazarov shares top spot in the scoring chart with Finland’s Max Granlund, while Switzerland’s talisman Andy Schmid is right behind them on 16 – and all are battling it out in group 7.

Schmid and Lazarov scored six each in the tight clash between their sides on Saturday, which was neck-and-neck until the final 10 minutes, when the Macedonian’s wealth of experience saw them through.

Speaking of goals, the Top 5 from round 2 is a joy to behold. Whether you fancy some pure power from Schmid or Miguel Martins, an inspired in-flight from Estonia or a simply stunning spin shot from Manuel Strlek – this collection has it all.

Next Article Seven takeaways from the first seven rounds

Get the Women’s EHF EURO look with hummel

All the action from Denmark is on ehf-euro.com

NEWS: Head to ehf-euro.com for all the news and features from the Women's EHF EURO 2020

The clock is ticking

NEWS UPDATE: D-1 until the EHF EURO throw off and all teams are ready to go, after Serbia overcame an early scare and got the green light to…

QUIZ: Who is the EHF EURO all-time top scorer? Which final lasted longest? See if you know the answers in our quiz

A new normal before the EHF EURO 2020 throw off

NEWS UPDATE: The 16 teams competing at the EHF EURO 2020 are getting used to a new normal, with Denmark and Spain relaying positive messages…

All previous winners on board; three Norwegians aiming for f…

FACTS AND FIGURES: All the numbers you need before the start of the Women’s EHF EURO 2020 in Denmark