The decision was confirmed on Tuesday by the European Handball Federation, as the seeding list for the competition – featuring 52 teams in total – was published.

AEK Athens complete the group of 12 teams which have been seeded directly to the group phase. 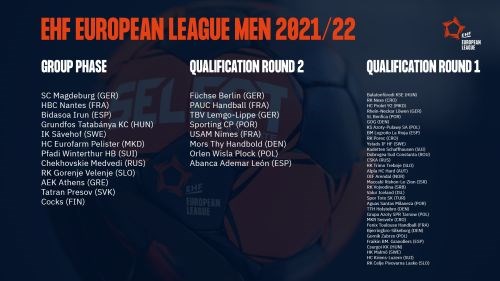 Of the remaining 40 clubs, eight, including EHF Finals Men 2021 participants Füchse Berlin (GER) and Orlen Wisla Plock (POL), have been seeded to qualification round 2.

Another 32 teams open the competition with their respective qualification round 1 matches on 28/29 August – the very first European club handball matches of the 2021/22 season – and the second legs on 4/5 September 2021.

The draw for these matches will take place on 20 July at 11:00 CEST at the EHF in Vienna. A live stream will be available on YouTube and Facebook.

The group phase featuring 24 teams will start with its first round on 19 October 2021 (draw on 30 September). The tenth and final round will be played on 8 March 2022.

The first legs of the Last 16 and the quarter-finals are scheduled for end of March and end of April respectively (the return matches one week later), before four teams will have made to the EHF Finals Men 2022.

The bidding procedure for the final event will start in due course.

GROUP D REVIEW: AEK Athens win by eight at home (34:26) and get the first points in the EHF European League

GROUP C REVIEW: The Swedish champions claimed a clear win, 43:31 against BM Logroño La Rioja in their first game in European handball after…

FACTS AND FIGURES: Load up on some interesting information before the European League group phase begins

Big names collide in round 1

ROUND PREVIEW: Opening round is already highlighted by top duels, including defending champions Magdeburg’s journey to Velenje

Füchse on the hunt for another trophy

DAY REVIEW: an exciting game in San Sebastian ended in a draw, while Lublin easily won a double-header against Bjelovar