The Women’s EHF Cup Semi-finals have yet to throw off but one thing is already for sure: at least one Danish player will win the trophy this season.

The semi-finals consist of three Danish teams - Herning-Ikast Handbold, Team Esbjerg and Viborg HK - while the fourth team, Siófok KC, has a Danish player in their squad: Simone Böhme.

The 27-year-old right wing will face one of her former clubs, Viborg. The first leg in Hungary will be played on Saturday at 17:00 CET (live on ehfTV.com).

“I have been looking forward to these matches ever since I saw the draw,” says Böhme, who has played for the Danish national team several times but was not called up for the EHF EURO 2018 in France.

“I still know many of the players in Viborg, and I have been following them closely during this season. They got a very bad start to their season in the Danish league, but they have improved a lot lately, and in the EHF Cup, they have been doing great all the time,” Böhme says. “Therefore, I expect a tough tie against them, but we simply have to be successful over two matches, as winning the EHF Cup is our main objective for the season.”

Siófok's last chance for a title

The EHF Cup is Siófok’s last chance to win a title this season. The domestic championship is again a matter between Györi Audi ETO and FTC-Rail Cargo Hungaria. And in the Hungarian Cup, Siófok were eliminated by Dunaújváros already in the Last 16.

“That was a huge disappointment to us, but it has made us so much more determined to win the EHF Cup instead,” Böhme says. “In the semi-finals, we will have to match Viborg’s physical strength first of all. Apart from Györ, Erd and FTC, the teams here in Hungary do not come with all that physical power, although the league here is very strong.” 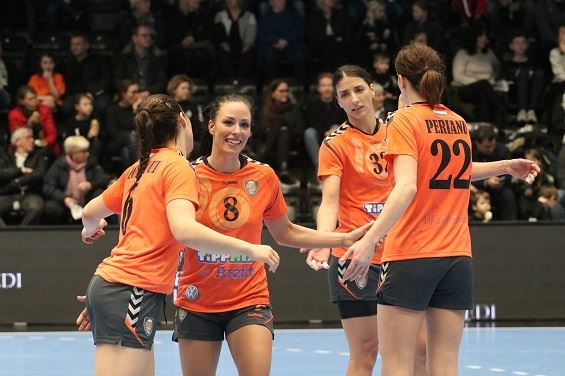 The right wing is aware of the importance of the first match Saturday.

“First of all, it is all about getting a good result in the first leg at home, and with the usual support from our fantastic spectators in a full arena, I am sure we will put up a good performance,” says Böhme, adding “it is a bit hard to say what will actually be a good result.”

“It would be natural to say that a win of six or seven goals would give us a great chance ahead of the return match in Viborg,” she says. “However, when we met Herning-Ikast away in the group phase for example, we thrashed them by 12 goals, which just proves that anything is possible.”

If Siófok advance to the final, Böhme can look forward to playing yet another Danish opponent for the title.

“We already met Herning-Ikast and with good results, but I do not really think that it matters much, which of those teams we meet, if we make it that far,” she says. “Anyway, it will be great for me to meet another Danish team, as I know so many of the players in the Danish league.”

Böhme is playing in her second season in Siófok after joining from CSM Bucuresti in 2017, and she feels well at her current club.

“I like it very much here, and the challenges I have met in CSM as well as here in Hungary have matured and developed me a lot. It has given me something extra this season that I have a coach who speaks almost the same language as I do,” she says, referring to Norway’s Tor Odvar Moen.

“I would not say that I am the type who needs particularly much security, but still, I appreciate the feeling of security to have a coach I can talk to without linguistic problems,” Böhme says. “So, yes, I am really happy to be here, but winning the EHF Cup would make the season perfect.”

Next Article 20 for 2020: New fan favourites and future world-beaters