It has been a while since Kadetten have looked at home on the international stage. However, with an interesting change on the bench and perhaps an update in philosophy, could this be all about to change?

Kadetten have a new man on the bench this season: 42-year-old Icelander Adalsteinn Eyjolfsson, who took over from Petr Hrachovec in July of this year.

The Icelander makes his way to Kadetten from German Bundesliga side HC Erlangen after much success.

Working in Germany for the past 12 years, Eyolfsson has built a bit of a name for himself taking clubs like ThSV Eisenach to the Bundesliga or going all the way from the third division with TV Hüttenberg to the Bundesliga.

Most recently, he gave HC Erlangen their best ever finish in the Bundesliga, when they managed a ranking of ninth in the 2018/19 season.

Kadetten fans are now surely excited to see if Eyjolfsson can take the Swiss side to new heights in European League group D and beyond.

The Icelander made very few changes to his squad over the summer months, only bringing in two new names (Teubert and Schmidt) and seeing one leave (Bojan Beljanski).

But maybe some stability is just what they need after being drawn into a tough European League group D alongside the likes of Rhein-Neckar Löwen, Grundfos Tatabanya KC, HC Eurofarm Pelister, RK Trimo Trebnje and the familiar faces from GOG, whom they faced last year in the EHF Champions League.

One of the bigger names in the Kadetten side, the Hungarian international has had a huge impact on the team since his arrival from PSG Handball in 2015.

He can be a little trigger happy on occasion, but the 36-year-old is a serious goal scorer for the Swiss side. Fans of the European League will be pleased to see his trademark standing shot along with his silky-smooth assist play.

Schmidt makes his way to Switzerland for his first stint abroad after six years in the German Bundesliga.

The line player brings international experience with the German national team, having been capped around 40 times.

Kadetten faced big problems – especially defensively – when the news of Zoran Markovic’s injury broke (ACL tear, surgery required), but with Schmidt they seem to have found an excellent solution in someone who can slide in and help with the defensive gap Markovic left behind.

The three-time EHF Cup winner will once again be a key figure for the Swiss side when the European League throws off and will surely relish the group D ties against his old club Rhein-Neckar Löwen. 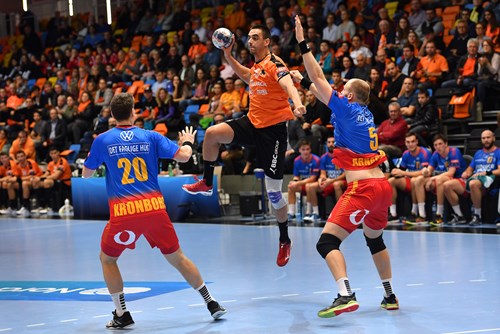 The Serbian back-court shooter made his way to Switzerland in 2018 after his EHF Cup Finals outing with Göppingen.

In the twilight years of his career, Sesum showed last season that his right arm still has plenty of goals in it, netting 30 in the EHF Champions League.

A season to remember...

It has been 10 years since Kadetten Schaffhausen advanced to the final in the EHF Cup, in 2009/10. On their way there they eliminated two Bundesliga teams: Frisch Auf Göppingen in the quarter-finals and SG Flensburg-Handewitt in the semi-finals.

The Schaffhausen team wrote one of the greatest stories in the history of Swiss club handball when they snatched a spot in the EHF Cup final.

In the quarter-finals against Göppingen, the Swiss side had to make up for a 33:29 loss in the first leg. And in the semi-final against Flensburg-Handewitt, they also lost 31:30 away.

Both times, the Schaffhausen side turned the result around in front of their home crowd in the return legs.

Unfortunately, the biggest sensation against their third Bundesliga opponents, TBV Lemgo, did not materialise in the final.

They won their home game 30:28, but lost 24:18 away. Nonetheless, this was the season the Swiss champions put their name on the European handball map.