This is the seventh article in the ‘Battle for the Throne’ series, looking back at handball’s rich history and future on the eve of the Men's EHF EURO 2022.

While handball started in the era of kings and queens, today, we live in the era of digitalisation. Handball has arrived in this new era as well. Accordingly, the weaponry used by the generals on the sidelines has evolved as well and developed the game further in the course of time. Thus, handball has become faster, more athletic, and more efficient due to scientific and digital progress.

Of course, numbers have always played a big role in handball. Soon after the invention of the sport coaches started to note which player on their team scored, how many assists were dished out, how many technical faults were made and much more.

However, these so called ‘counting statistics’ can be very misleading. For example, a player that scored six goals in a game could have had a great game if he scored his six goals with six shots. But if he took 17 shots, his game wasn’t that great. That’s why shooting percentages that put the number of shots and goals in relation were added to the counting statistics to measure efficiency.

The game is becoming more efficient

The quest for efficiency has continued ever since. Among other things, it can be seen in the trend of the frequency of backcourt shots. Since the EHF EURO 1998 the success rate on these shots has varied between 37% and 47%. Besides direct free throws, shooting percentages from no other position or play type are nearly as low.

Hence, to play more efficient and successful handball back court shots should be limited as much as possible. Instead, the focus should rather be on getting breakthroughs, shots by line players and penalties as these are the most efficient shots.

And that is exactly what is happening. Since the EHF EURO 1998  the frequency of back court shots decreased significantly, from 46.7% in 1998 to 34.8% in 2020. In turn, this is the main factor for the overall shooting percentage increasing significantly: 24 years ago, 54.1% of all shots were converted but two years ago this percentage had gone up by seven.

That is why classic shooters are seen less and less. Instead, back court players such as Denmark’s Mathias Gidsel or Iceland’s Ómar Ingi Magnússon that are nimble, agile, strong in one-on-one situations and have a good eye for better positioned teammates are rising as the new kings. 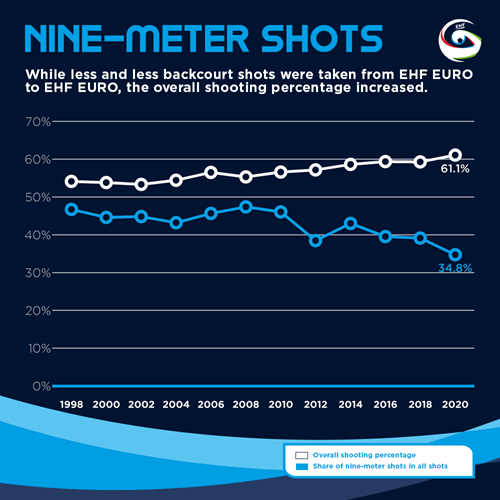 The pursuit of getting competitive advantages trough numbers has led to a big change in professional sports in general. It all started with the ‘Moneyball’ revolution in baseball at the beginning of the century. As seen in the Hollywood film of the same name starring Brad Pitt, organisations that base their player and opponent evaluation on advanced data analytics were significantly more successful than teams that rely on more traditional methods. In the years since, this has also proven true in other sports such as basketball and football.

Now, advanced statistics are on their way of conquering handball as well. The first step in this direction has been the cooperation between the EHF and their technology partner, KINEXON. The live-tracking technology of the German IT company provides highly accurate performance data such as shot speed, jumping height, airtime or passing statistics live during games.

The cooperation started with the introduction of the iBall at the VELUX EHF FINAL4 2018, followed by the iBall and player tracking at the EHF FINAL4 the next year. Since 2020, the technology has been implemented at EHF EURO tournaments.

Whereas previously data were recorded manually, which is of course prone to errors, KINEXON’s ball and player tracking technology does this automatically. Both the official SELECT/KINEXON iBall and the shirt under each player’s jersey contain a small chip that provides everyone’s position at extremely short intervals through a radio-based sensor technology.

Kinexon will be once more at the heart of the game at #ehfeuro2022 and serve teams and fans with valuable data 📊 Discover the power of @KinexonSports' tool: https://t.co/snSicd7n3z pic.twitter.com/hrnv5Upj5t

At the Men’s EHF EURO 2020 over 7 million data points from the 65 matches were collected, with around 110,000 data points collected in each match. Based on this, advanced statistics can then be generated.

Analysis carried out by  EHF Competition Commission member Carmen Manchado from the University of Alicante, proving how players’ tracking helps to improve training methods and how the next generation of data analysis is improving handball.

Besides data that helps to evaluate player or team performances KINEXON’s technology also offers metrics on health such as heart rate or metabolic load. With the heavy load that some players face this data can be essential for coaches to manage the playing time and load of their superstars in order to have them at the top of their game in crucial situations.

While the generals have upgraded their armoury, not only coaches, scouts and team officials benefit from these new ways of statistical evaluation but also fans in the arena and at home. Now they can follow the match enriched with fascinating information not available before.

The analytical coverage of the EHF EURO 2022 itself will also be on a whole new level. During the tournament the performance of players and teams will be dissected and analysed based on these new advanced statistics and metrics together with tactical insight in several articles on the tournament’s website as well as shows on the Home of Handball Twitch channel.

And all of that is just the beginning. The methods to evaluate performance in handball and the weaponry used by the generals on the sidelines continue to evolve and are getting better and better. There is no end in sight.

Next Article Romania take huge step towards next stage

FEATURE: 11 participants in the Respect Your Talent 2021 programme have featured at the Women's European Championship

FACTS AND FIGURES: Champions League stars made up the bulk of the EHF EURO 2022 All-star Team and 54 of players at the final weekend

The data behind the final between Denmark and Norway

TALKING POINTS: A ninth title for Norway, a perfect farewell for a Montenegrin icon, and returning All-stars headline the final weekend

SUMMARY: Coverage of the final day of the Women's EHF EURO 2022 in Ljubljana

BRONZE-MEDAL MATCH REVIEW: Montenegro took their first medal in any competition after a decade-long wait, as they defeated France 27:25

EHF EURO PODCAST: The podcast, in cooperation with the (Un)informed Handball Hour, delivers the inside stories of the Women’s EHF EURO 2022