A new competition, a new trophy: The four teams competing at the EHF Finals Women 2021 in Romania this weekend know exactly what they are fighting for.

The newly created trophy for the EHF European League, Europe’s revamped second-tier club competition, has been revealed. And for the first time there will be no difference between the trophy for the women’s and the men’s editions of the competition.

The trophy is made from cast aluminum, a sustainable material. Built and designed by Spanish agency OIKO Design, which specialises in the design and production of environmentally friendly trophies, the big prize for the EHF European League weighs eight kilograms and is 76 centimetres tall. 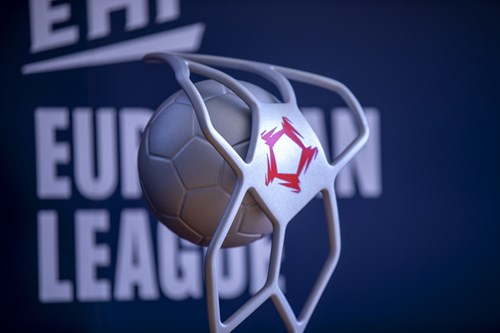 Trophy first handed over at EHF Finals Women on Sunday

The trophy will be handed over for the first time this weekend. The premiere edition of the EHF Finals Women in Baia Mare starts Saturday with the semi-finals Nantes Atlantique Handball vs CS Minaur Baia Mare (14:45 CEST) and Siófok KC vs Herning-Ikast Håndbold (18:00 CEST), followed by the 3/4 placement match (14:45 CEST) and final (18:00 CEST) on Sunday.

The men’s edition of the EHF Finals is scheduled for SAP Arena in Mannheim, Germany, on 22/23 May, with hosts Rhein-Neckar Löwen and fellow German sides Füchse Berlin and SC Magdeburg as well as Polish contenders ORLEN Wisla Plock in the mix.

GROUP C REVIEW – Magdeburg enjoyed a straightforward win against Nexe that moves them top of Group C with an unbeaten record.

GROUP D REVIEW – Stipe Mandalinic was in strong form as Eurofarm Pelister showed no mercy against Sporting CP (31:25) to keep their hopes o…

GROUP C REVIEW : Logrono La Rioja increased their hopes of progressing from the group phase after they inflicted PAUC’s fifth loss of the se…

GROUP A REVIEW: Polish side win thriller at Irun thanks to last second goal by Michal Daszek, 29:28

Benfica set up XXL comeback to draw in Nantes

GROUP B REVIEW: After twice trailing by five, Benfica pulled off a huge comeback in the last seconds to take a point in Nantes

GROUP C REVIEW - Sävehof returned to Sweden having had to fight hard in Velenje, before they eventually claimed the two points with a 31:35…

GROUP D REVIEW – Kadetten Schaffhausen won their second match in a row with a three-point victory away to AEK Athens (28:31), in which Joan…

GROUP A REVIEW: The French side take their third win in their last four matches, while TATRAN are without a in five rounds

An early Christmas gift for Chekhov; their first win of the season leaving Cocks without a point in 2021.